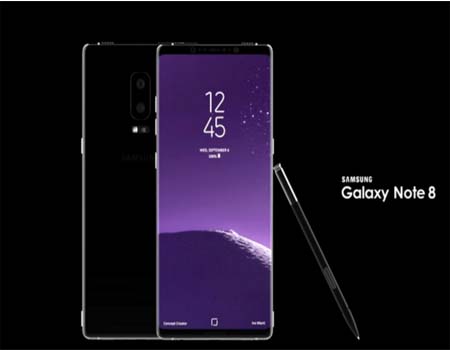 THE management of Samsung Electronics West Africa, has announced that its newest smartphone in the Galaxy Note Series, the Galaxy Note 8, is now available for pre-registration in Nigeria from September to October and that customers who pre-order will get a free fast charge battery pack and a free back cover upon purchase.

Mr Paul Lee, Managing Director, Samsung Electronics West Africa, who made the announcement, also said that since the launch of the first Note, technology has rapidly evolved, making what was impossible six years ago now impossible to live without.

“The large immersive screen always sets the Note series apart, pushing the display boundary and giving Note lovers more space to do more. With an edge-to-edge display that covers nearly the entire front face of the device, the Note 8 has the largest screen ever on a Note device. With the cinematic screen and Samsung’s cutting edge Quad HD Super AMOLED display, movies look crisp and clear, photos are brilliant and games are truly immersive,” Lee explained.

“Coated in Corning Gorilla Glass 5.0, the Galaxy Note 8 has a 6.3-inch screen with Super AMOLED display, allowing for clearer videos and images with a resolution of 2,960 x 1440 (Quad HD). The device is also water and dust (IP68)-resistant. Users do not have to worry about getting the device damaged when accidentally dropped in water, as deep as 1.5 meters, for up to 30 minutes. The device stays with its users through rain or shine.

“Built with 6GB RAM, a 10nm processor, and expandable memory (up to 256GB), the Galaxy Note 8 offers users more flexibility for browsing the internet, streaming videos, playing games, and multitasking,” he added.

“The S Pen has always been the heart and soul of the Note series by allowing users to be creative and productive. Combine the simplicity of the pen to the power of the Note, the fine tip and greater pressure sensitivity faithfully captures each stroke. The advanced S Pen is now paired with the largest screen ever put on a Note, providing users a large canvas to write on,” said Director of Information, Communication & Technology for Samsung Electronics West Africa, Mr EmmanouilRevmatas.

“One of my favourite features is the Live Focus mode, which gives users the freedom to decide how much your subject stands out by adjusting the blur and focus of the background in real time. The background blur can be adjusted even after the picture is taken. The Note 8 has optical image stabilization in both cameras, producing clean, clear shots even when on the move,” continued Revmatas.

Why we picketed MTN, AEPB —Wabba