Rumpus in INEC after handover by Yakubu 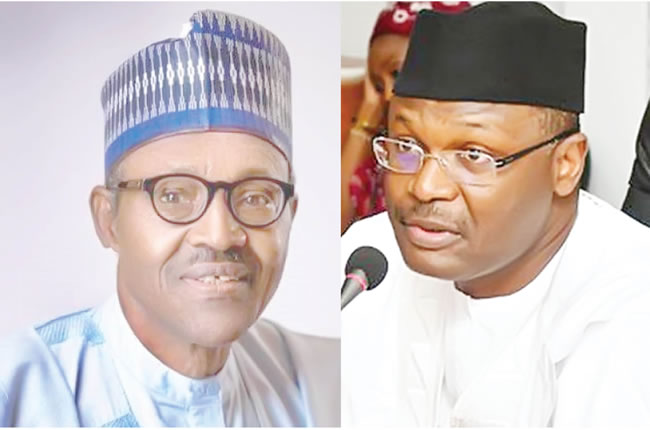 VARIOUS powerful interests bent on hijacking the leadership of the Independent National Electoral Commission (INEC) are currently locked in an intense supremacy tussle after Professor Mahmood Yakubu stepped aside at the end of his five-year tenure on November 9, 2020.

The bitter struggle, as learnt by the Nigerian Tribune on Sunday night, involved influential officials in the executive and legislative arms of government, as well as the All Progressives Congress (APC).

The plot, which began to manifest about two weeks ago, reportedly thickened shortly after Yakubu stepped aside to await the confirmation by the Senate of his reappointment for another five years by President Muhammadu Buhari.

The reappointment was announced through a statement by the president, a development many observers described as contravening the established procedure and process of such announcement usually done after a meeting of the Council of States, comprising the sitting president, former presidents, vice president, President of the Senate, Chief Justice of Nigeria (CJN) and ex-CJNs.

There were indications that the variegated interests of the power blocs and the attendant intrigues was threatening to destabilise the nation’s election management body, especially its independence as the commission should serve the interest of all political parties.

This is even as indications emerged that the APC was enmeshed in a regime of crises as a result of the intense power play among key players in the party’s leadership cadre determined to who holds which sphere of influence, preparatory to the 2023 elections.

According to the sources, at the centre of the supremacy tussle was also said to be a minister from the North-West, nursing a governorship in his state in 2023.

Signs of the power play began to emerge following the announcement that the tenure of Professor Yakubu and some national commissioners had been renewed.

This was in sharp contrast to the process and procedure outlined in the 1999 Constitution that the President, in the exercise of his power to make appointment to INEC, “shall” consult the Council of State comprising former presidents and all serving governors of all political parties.

In other words, such announcements are usually made after the Council of State meeting through the instrumentality of a letter written to the Senate for a reconfirmation of a renewal of the tenure for such appointments. President of the Senate, the number three citizen, usually reads out the letter from the Executive arm of government, signed by President Muhammadu Buhari, requesting Senate confirmation.

Informed sources at top official quarters, the APC leadership cadre and the Senate said the announcement was made “with a view to checkmating other moves by members of other power blocs angling to take over control of INEC.” In fact, the simmering contention in the APC over the timely organisation of its national convention, where members of its National Executive Committee (NEC) are expected to be voted into office, is not unconnected with the unfolding power game with INEC as its centrepiece.

The sources said there were conflicting signals regarding what went into the renewal of the tenure of Professor Yakubu, with those outsmarted threatening to open up in the coming days.

There is palpable apprehension that the renewal of Professor Yakubu’s appointment by the Senate may be stormy. Until the Edo State election, some were of the opinion that the incremental progress instituted by Professor Attahiru Jega, the immediate past national chairman of the INEC, had suffered tremendous damage in the hands of the leadership of the present electoral body.

While there are indications that the Senate may not resume its plenary until January 2021, as a result of ongoing work on next year’s budget by various committees, pressure is reportedly being mounted on the leadership of the Senate by the power blocs in APC behind Yakubu’s reappointment to reconvene this week, for the purpose of sealing the renewal of Professor Yakubu’s mandate.

The push for the resumption of the Senate is reportedly being spearheaded by a very powerful member of its leadership who was said to be fully entrenched in the move for the retention of Yakubu as INEC chairman.

There were said to be two power blocs in the Senate interested in not just the headship of INEC, but the fresh appointments of national commissioners and resident electoral commissioners (RECs).

According to the sources, the move will ensure that current experienced commissioners that should be elevated are possibly removed.

Two very powerful officers in the Senate are said to be in opposing camps in the intense power play and both are said to be of the APC stock. While one is for the retention of Yakubu, the other, said to be acting in concert with some other forces within Aso Rock, is believed to be rooting for the appointment of one of the national commissioners who hails from his own geopolitical zone and an in -law to take over from the incumbent.

At the executive arm of government was said to be an influential minister from the North-West who wants to be a governor. He was said to favour his own chairmanship candidate nominee and those who should be commissioners but appeared to have been outsmarted for now by one of the blocs behind Yakubu.

From the camp of the APC leadership, the re-appointment of Yakubu is seen as a potential repudiation of further push from the South-West zone, based on what an insider described as a “seeming entitlement of a takeover in 2023 after President Buhari.”

Yet, a source within INEC made it clear that “the potential series of crises that are likely to overwhelm INEC are going to rear their heads with the filling of slots that would soon be vacant in North East – on account of tenures that have ended – as well as operational nuances that may alter long-held procedures of engendering elections that would stand the test of time.

“Some of the new people that Nigerians will begin to see within the commission will likely signpost the type of election Nigerians will witness in 2023. All those whose faces represent a hopeful future for credible elections in the system at the moment may be eased out instead of being elevated as national commissioners.

“At least, the nomination of a known presidential aide as a national commissioner was a clear indication of what is to come and meant to test the waters,” the source alleged.

As of last week, there were ripples within INEC over the moves to bring in another national commissioner nominee from Gombe, where the acting chairman, Air Vice Marshal Ahmed Mu’azu (retd) hails from.

This is apart from discreet moves to upturn the balance in the ethnic configuration of the top management of the commission, with an emerging plot to reverse a Federal Government of Nigeria circular, which suspended the tenure policy in the Federal Civil Service (FCS) to achieve what insiders in INEC described as planned replacement of individuals holding directorates.

Some of the ongoing moves to take over and control INEC are said to be part of the fallout of the demise of both former Chief of Staff to the President, Mallam Abba Kyari and Ismaila Isa Funtua, as well as the absence from active participation in Villa politics of Mallam Mamman Daura. Other sources in INEC said that the experience and capacity of Hajiya Amina Zakari, who once acted as chairman, stood her out among her peers.

A source stated: “But for the so-called relationship she is said to have with President Buhari, Hajiya is very competent and has experience that cannot be rivaled within the commission. The institutional memory she packs remains an asset.” It was discovered, according to a source, that a national commissioner who resigned recently, described by insiders as a very objective, straightforward and a honest man who does not give-in to ethnic and religious biases, “stayed after much pleas as he had wanted to have resigned before the 2019 election, with a concern over what is ahead that may come with grave consequences for the polity.

“There is another national commissioner who has just been reappointed but had wanted to resign but is being prevailed upon to remain.”

However, at the headquarters of INEC, the acting national chairman, Ahmed Mu’azu, who is going ahead with his duties, was also said to be faced with underhand cuts by some prodded officials and a national commissioner to cause the postponement of some scheduled bye-elections.

It was gathered that a virtual meeting was held last Thursday, where the idea of postponing the bye-elections until the return of Yakubu was muted. While some who wanted to be in the good books of the chairman were said to have tacitly endorsed the move, sources said the move was roundly rejected by many, a pointer to the increasing confidence of and capacity to lead by Mu’azu to lead the commission.

A top-level source who craved to remain anonymous said he was not surprised about the ongoing intrigues over the situation concerning the stepping aside of the INEC boss and the attendant power struggle among some power centres, disclosing that many of such vested interests embarked on similar moves long ago. The source challenged those who had any definite evidence to support their claims to produce them instead of engaging in shadow boxing.