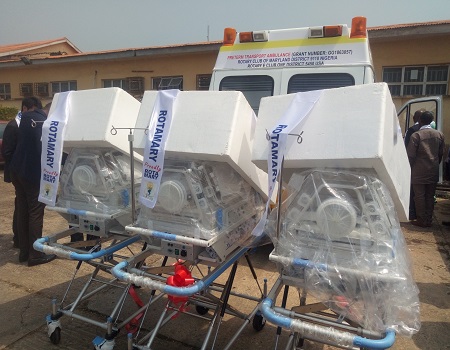 Share
In its bid to reduce maternal mortality in the country,  Rotary Club of Maryland District 9110, Ikeja, Lagos,  has donated a Preterm ambulance and neonatal incubators to the Ogun State government, Friday.
The President of the Club, Rotarian Adekunle Adeniyi, said the project was one of the community service of the Club to humanity which was conceptualised in the rotary year of 2017/2018 with its implementation and completion during the rotary year 2018/2019.
Adeniyi described infant mortality as a major challenge in many African communities, saying that premature infants deserved to live, hence, the resolve of the Club to “give tinest babies opportunity to keep them in optimal condition during their transportation  to referral facility.”
He lamented the absence of the provision of dedicated transport services for newborns, submitting that the gesture would give health workers in the state ministry of Health to manage critically ill infants during transport.
“Prematurity is one of the leading causes of neonatal mortality in our community. Of particular concern is premature infants delivered at peripheral health facilities such as Primary Health Centres who would have survived but for lack of basic transport equipment to referral health facilities such as teaching hospitals and general hospitals.
“These sick premature babies can be provided with better care and outcome if they are timely transported in stable condition. At present, transport of preterm new-borns in Nigeria as a whole and our community, in particular, are not encouraging,” he added.
The chairman of the Project Committee, Rotarian Olufemi Akodu, said the ambulance incubators have an in-built inverter that would last for over 24-hours.

He explained that the Project was much for the Club to bear while appreciating the  Rotary eClub One, USA, Rotary International, District 5450, Rotary Foundation and Rotary International for supporting the project.
In his remarks, the state commissioner for Health, Dr. Babatunde Ipaye, said that maternal mortality has reduced in the state, promising government determination to make use of the equipment to the benefit of the people.
Ipaye commended Rotary Club for inspiring so many Nigerians with its philanthropic gestures, adding that it would help the state government get to the target of the MDGs quickly.
“We’re aware of the enormous lifesaving that this will do for us and we promise to put it to judicious use,” he said.
ambulanceRotary club
Share

20-year-old in court over alleged cultism, assault on student