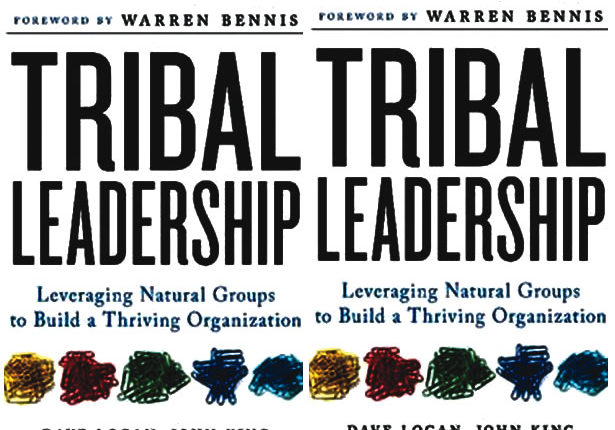 Written by Dave Logan, John King and Halee Fischer- Wright, Tribal Leadership is a new perspective on company culture consisting of a series of “stages”. This theory requires no immediate organizational overhaul and instead concentrates on a behavioural hierarchy where companies “level up” their individual employees. In short, and refreshingly, the project tools do not change; instead, the way of looking at employees within each Stage becomes the focus.

The strange thing about leveling up through Tribal Leadership’s Stages is that it’s best to keep this unspoken. While it’s easy to categorize employees into particular Stages, the point here is that each individual is not a “Stage Two” personality, but rather motivated by a particular “mood” or malleable life philosophy. The idea is to empower individuals to transition through the levels of a healthier work life. Here is an outline of those levels.

The stages of culture

Stage One Culture: Here employees operate under the model that life in general is a series of disappointments. People in this stage alienate themselves from productive members of the company and fall into destructive behaviour simply because they’ve hit rock bottom and feel as if they’ve got nothing to lose. It’s basically the point at which people steal, embezzle or “go postal” and outlier groups at this stage are often seen as “gangs.” When an employee is in this mindset it’s best to encourage them to socialize with others outside of the destructive gang and to offer ways in which life in general is not simply suffering.

Stage Two Culture: The employees in this stage don’t operate under the “life sucks” mantra so much as they operate under the “my life sucks” mantra. They feel like victims of circumstance and want the company to change but feel powerless to enact it. They form sparse dyadic (two-person) relationships lamenting their lot in life. As employees find ways to improve this situation they begin to see how their efforts matter, they reach out to mentors, and they own success in their projects.

Stage Three Culture: This level of employee takes pride in their work but is seen as a “lone wolf” overcoming obstacles on solo missions. Stage Three employees believe, “I’m great – and you’re not.” Similar to Stage Two, these individuals form a series of dyadic relationships but here, rather than complaining together, relationships are based on co-conspiracies. These relationships are competitive and information is withheld to create self-benefiting outcomes. These employees value their own contributions above those of the team. Members of academic institutions often show these tendencies. To level up through this stage, leaders focus on assigning larger group projects, emphasize the value of networks and encourage transparency for the good of the larger collective.

Stage Four Culture: As employees move from a Stage Three to Stage Four mindset, they must have the epiphany that their contributions to a tribe-wide objective mean more than their personal successes. Stage Four employees believe “We’re great – and they’re not.” It’s the point at which your team rallies to defeat a common enemy. At this stage, team members recognize each other’s strengths and form triadic (three-person) relationships while partnering to reach shared outcomes. Here trust is not earned, but rather becomes a given. Team members become the embodiment of core values. Most functional organizations operate at this level, but in order to level up leaders encourage networking and “triading” to expand the breadth of resources and knowledge.

Stage Five Culture: This group works on the “life is great” mantra in which the culture is devoid of competitors. These organizations align with a greater “noble cause” and tribal elders are seen as “brokering treaties” with other like-minded tribes. While individuals can regress into any of the earlier cultural stages, this stage is the end goal for those looking to elevate their team to a level of peak performance.

Happiness is key to productivity

The goal of “Tribal Leadership” is to help leaders move as many employees through the levels of culture as they possibly can in order to increase job performance. Job performance is based on job satisfaction and happiness in general. Through continual assessment of priorities, creation of networks and mentorship programs, leaders can increase happiness and productivity without forcing disruptions to the day-to-day operations.

It isn’t right to esteem people above principles (1)

Review of If I Could Tell You Just One Thing

Review of Managing in Turbulent Times