Residents upbeat as Oyo government lights up Ibadan for Christmas

by Tribune Online
in Features, Latest News
Reading Time: 3 mins read
A A 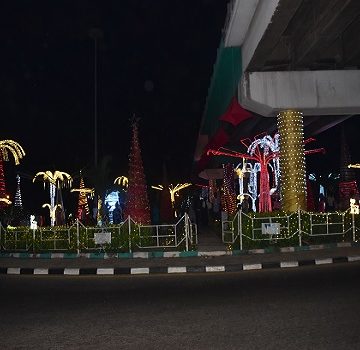 In recent times, Ibadan is coming alive again, unusually bubbling for Christmas as the streets, roundabouts and strategic areas in the ancient city are lightened up for the Yuletide season.

This December is definitely going to be a ‘detty’ one for residents of Ibadan as the Oyo State government under the leadership of Engr Seyi Makinde, beautified the city of Ibadan. He ignited the festive mood in Ibadan by decorating some major roundabouts with Christmas lights and Christmas trees.

Someone coming to Ibadan for the first time would mistake the premier city for Lagos or Dubai during the festive period.

Excited residents of Ibadan, have been trooping to the Challenge roundabout, Iwo road, Ring Road and State Secretariat where amazing Christmas decorations have been put in place. They come to experience the ‘New Dawn’ that Seyi Makinde has brought into the city.

The roundabouts that hitherto deserted and full of dirt now have beautiful decorations which are attracting lots of  human traffic.

One of the residents, Akinbelu Ademola, who came to the secretariat roundabout with his family, expressed his joy and happiness over the development in the state.

“This is a wonderful development, the whole state is taking a new turn. Someone coming into the city can see beauty all around. It is Christmas time and there is a reflection of light all over the city.

“I appreciate the effort of the state government in making sure that the environment is lit for Christmas.”

Another resident, Christopher Araoye, who also visited the roundabout with his family commended the effort of the state government on the development.

“I appreciate the aesthetic value put in place and I commend the efforts of those that have made it possible so that people can gather and have the sense of the season because this is a season of love and it brings about the coming together of people to share and experience love even in nature and amongst the gifts that God has given us.

“I thank the state governor for making this possible for the people of the state.”

Another excited resident, Ayobami Afolabi, stated that such development has never been seen in Ibadan while tagging the development as a new dawn to the state. She thanked the state government for giving his people an environment to relax and enjoy the festive period.

At Challenge roundabout, there is no doubt that residents are also glad. Traders left their wards just to take pictures at the roundabout, children were also seen playing around and shouting for joy.

Adekunle Lawal, who made a stop at roundabout from work, said one can easily mistake Challenge for Lekki in Lagos.

“This is the most beautiful thing I have seen since I moved to Ibadan, Seyi Makinde has really ignited the festive period in Ibadan.

“Anyone coming into Ibadan at this period will mistake Ibadan as Lekki. Our governor is really doing wonders in the state, people can come here to relax after a hectic day at work. Thank you Seyi Makinde for bringing peace to Oyo State.”

The residents of Oyo should look forward to a funfilled festivity this December.