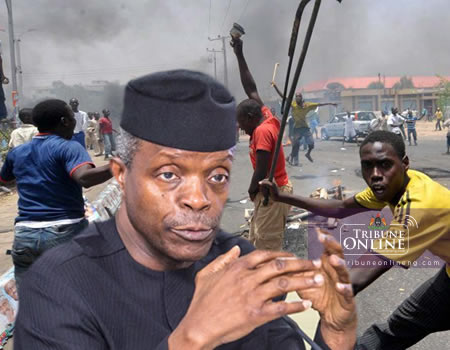 ACTING President Yemi Osinbajo has expressed concern over the renewed outbreak of violence in Kaduna which led to the death of many people in Kajuru, Kajuru Local Government Area of the State.

He has consequently ordered further security reinforcements in the state.

A statement issued by his spokesman, Laolu Akande, in Abuja on Wednesday, said Osinbajo condemned the act of violence in strong terms, noting that the security challenges in Southern Kaduna which has led to the needless deaths was a source of concern for the Federal government and indeed all well-meaning Nigerians.

Osinbajo commiserated with families of the victims, the government and people of Kaduna State, and wishes the injured victims speedy recovery.

He also commended the prompt response and efforts of the State government, and those of the security agencies which contained the situation and restored the peace.

The statement noted the previous and ongoing efforts of the present administration to confront the situation, assuring that no effort would be spared in identifying and bringing  perpetrators of these dastardly acts, against innocent Nigerians to justice no matter how long or hard it may take.

The Acting President observed that Nigerians in the area and everywhere in the country have a right to live in peace, and the Federal Government considered this its sacred duty to ensure such expectation.

“We will not relent and won’t be deterred in our pursuit of securing the lives and property of all Nigerians, everywhere and in every part of this nation. In the end, we will not only secure the peace all around, but we shall enforce justice for the victims and all of those that are affected,” Osinbajo stated.