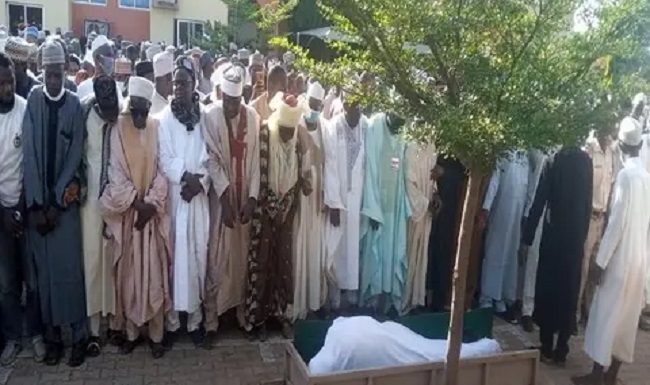 The remains of former governor of old Kaduna State Abdulkadir Balarabe Musa has been laid to rest at Unguwar Sarki cemetery, Kaduna.

The Mosque was filled to capacity as people trooped from far and near to witness the funeral rites of one of the country’s finest politician.

The state governor, Mallam Nasir el-Rufai was represented by the  Secretary to the State Government (SSG), Balarabe Abbas Lawal.

Two former Governors of the state, Ahmed  Makarfi and Mukhtar Ramalan Yero were among the important dignitaries that attended the funeral prayers.

At exactly 4.45 pm, the body of Balarabe Musa was laid to rest with hundreds of mourners paid their final respect to the champion of the Talakawas.

Former Governor, Ramalan Yero who was visibly shocked over the death of Balarabe Musa described him as a politician with integrity, whose virtues should be emulated by the current crop of leaders.

He said Balarabe Musa demonstrated that leadership and politics are about people.