We recorded over 1,000 cases of meningitis in Sokoto —Gov 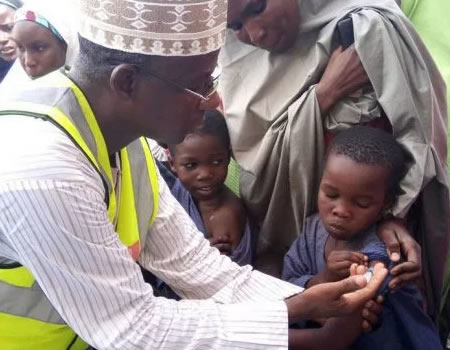 TRADITIONAL rulers from the Northern states and the governors from the North, on Tuesday, held a meeting in Kaduna, Kaduna State, where they resolved to end the problem of Cerebrospinal Meningitis (CSM) ravaging some parts of the North.

The traditional rulers were led by the Sultan of Sokoto, Alhaji Abubakar Sa’ad, who was represented by the Emir of Zazzau, Alhaji Shehu Idris, and the meeting was held at the Sir Kashim Ibrahim Government House.
Also at the event, Sokoto State governor, Alhaji Aminu Tambuwal, disclosed that over 1,000 cases of meningitis were reported in the state.

Speaking during the emergency meeting, the Sultan of Sokoto said that the royal fathers were determined to assist in tackling the menace of meningitis ravaging some communities in the region.

Sa’ad disclosed that so far, about 16 states in the country had been affected by the disease, adding that efforts by the federal and state governments to combat the disease were commendable.

In his own remarks, Governor Nasir el-Rufai of Kaduna State, said the North-West zone had been battling meningitis epidemic for the past two months.

“It is a new type of meningitis that our health care professionals are not conversant with- type C meningitis.

“Here in Kaduna State, we have 17 suspected cases across the 11 local government areas with one type C case and one death.

“We have instituted measures alongside those instituted by neighbouring states and with the steps we have taken, we hope the epidemic will not occur in Kaduna State.

“We have intensified surveillance and engaged in mass media enlightenment while mobilising appropriate medicines and medical supplies in our hospitals across the state.” he said.

Also speaking, Governor Aminu Tambuwal of Sokoto State revealed that “we had cases in about seven local governments. We had over 1000 cases reported and the state government had to mobilised with traditional leaders in the state and other stakeholders, particularly our development partners.

“We had a collaboration with the Federal Ministry of Health. We received over 20,000 vaccines from the ministry and we are expecting about 800,000 more vaccines. Our target is to have two million vaccines for vaccinations to cover most of the areas.”

Doctors confirm case similar to meningitis in Delta
Doctors at the Central Hospital, Warri, Delta State, have confirmed a case with symptoms similar to that of cerebrospinal meningitis.

This is the first similar case to be recorded in the state since the outbreak of the pandemic some weeks ago in the country.

Some of the doctors made this known during an interview with journalists on Tuesday, at the hospital premises in Warri.

They disclosed that they were attending to a female patient, whose identity was undisclosed, who had arrived the hospital with typical symptoms of meningitis.

A consultant physician at the hospital, Dr Ngozi Chukwubeni, said the patient had no exposure to endangered meningitis belt of the country in recent time.

According to her, the patient had been taken through the appropriate examinations and laboratory tests.

She disclosed that the patient was responding to treatment.

“We have a female patient. She came with classical symptoms of meningitis, headache, vomiting, neck pain and stiffness.

“There was no history of recent travel to the meningitis belt or exposure. We did a dumber puncture.

“We made an assessment, clinical features and laboratory investigations and placed her on antibiotics. The patient is responding very well,” Dr Chukwubeni noted.

On steps being taken to halt spread of the disease, Chukwubeni said they were on top of the situation.

“There is 100 per cent synergy. We cannot work in isolation. We work with government. This case has been reported. Action plan will be taken at the state level.

We, on our own, are taking necessary measures to prevent future occurrence and also protect our staff from getting infected by applying basic precautionary measures.

“We (Warri Central Hospital) are going to educate our staff on Wednesday, on meningitis, on the clinical symptoms, how to identify a case, and necessary precautionary measures to be taken while nursing patients.

Also talking to journalists, a consultant gynecologist at the hospital, Dr Stanley Nnoli, advised parents and guardians to be vigilant with their children and wards.

According to him, handling of ailments hitherto treated as common should henceforth be taken seriously and proper medical attention sought when ailments like fever occurs and persists.

Search for new cases, Health Minister directs FMC Zamfara
In a bid to stem the tide on the spread and rising cases of death caused by meningitis, the Minister of Health, Professor Isaac Adewole, has issued a directive to the management of Federal Medical Centre, Gusau, the Zamfara State capital, to immediately activate a case-finding mission to remote regions the disease might have spread to in the state.

The minister gave the directive during his visit to the hospital on Monday.

Addressing the management team, he said “set up a rapid response team and let them go and find cases.

“This is not the time to wait for referrals before you treat. You should go out and search for cases.”

He called on the facility to assist in strengthening the Primary Health Care system in the state in order to curtail the current meningitis outbreak and future occurrences.

The minister recalled a picture (of a girl receiving treatment on the floor in one of the state PHCs) that made the front page of a recent edition of some national newspapers, describing it as unacceptable.

“What I saw in the newspaper is unacceptable. They are human beings and not animals and we must treat them with dignity,” he said.

He promised the hospital of the ministry’s support in ensuring that Zamfara people had access to more healthcare, so as to halt unnecessary death in the state.

Stop tagging an ethnic with a particular crime ― Sultan of Sokoto