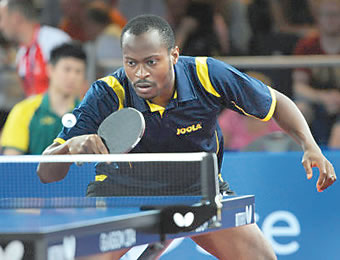 Nigeria’s Aruna Quadri has become the first African player to top the rankings of players in the Commonwealth.

Among the 277 players on the rankings, Quadri, who remains Africa’s best player garnered 2385 points to beat Singapore’s Gao Ning, who had 2384 points, as England’s Pitchford Liam had 2277 points to occupy the third spot on the ladder.

Africa’s most decorated star, Segun Toriola is rated 12th with 2014 points behind players from India, Canada and England.

Prior to the May rankings, Quadri had been playing a second fiddle to Singaporean Ning.

In the women’s rankings, no Nigerian made the top 20 list as Edem Offiong and Olufunke Oshonaike were ranked 23rd and 26th respectively.

But it was not the same story for Omar Assar as the Egyptian failed to save his club from going into relegation.

With this development, Omar Assar will be campaigning in the lower division of the league next season.

Euro 2016 q/f: This is Wales’ biggest game in decades—Bale