Latest News
By Adewale Oshodi and Kingsley Alumona On Jun 8, 2019 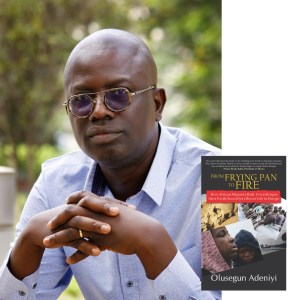 Author and journalist, Olusegun Adeniyi, has charged the Federal and state governments to provide opportunities for Nigerians in order to curb the high incidence of human trafficking.

Adeniyi, who is the chairman of ThisDay editorial board, gave this charge during the book reading and signing of his latest work, “From Frying Pan to Fire,” at the Book Sellers, Ibadan, on Saturday.

He said that government must delve into the root of the problem for its solution, while also commending the Edo State government for the successes it had recorded in the area.

“With the Edo State government and Oba of Benin taking the bull by the horn, traffickers are now moving into other states like Oyo, Kwara, among others, for their victims.”

One of the discussants at the event, Folu Akintola of the Nigeria Immigration Service, lamented that victims are no longer being taken to Europe, but Asian countries where they are made to work long hours as maids, or they fall victims to organ harvesters.

Another discussant, Oyindamola Bamgbose, the Oyo State Coordinator of the National Human Rights Commission (NHRC), charged young people, especially girls, to keep themselves busy as well as productive in order not to fall victim of human traffickers.

She said they could make themselves productive by volunteering their service for free so that they could  remain relevant to issues around them.

The books focuses on Adeniyi’s
encounter with victims of human trafficking.