Properties worth millions of Naira destroyed by fire in Bauchi 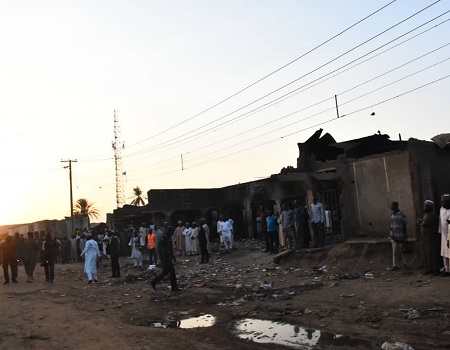 Properties worth millions of Naira have been destroyed in a fire outbreak that gutted the Railway market in Bauchi.

One of the victims of the disaster, Olu Okeneye, told our correspondent that he lost everything in his shop to the fire incident which occurred in the early hours of Saturday from yet to be identified source.

He narrated that he was at home when he called to quickly come to the market to see if he can salvage anything from his shop but he said that before he could get there, the damage had been done.

Another victim of the incident, Aliyu Bello, narrated that the fire might have been caused by power surge because according to him, as at the time most of them left the market Friday evening there was no power supply.

Aliyu Bello who said that he is tailor lamented that he lost five sewing machines, customers materials and other valuables in the fire incidence appealing to government to bring succour their way so that they can pick up the pieces again.

Malam Sani Garba who spoke on behalf of the affected victims confirmed that SEMA has conducted an assessment on the damages disclosing that 11 shops and 2 houses were affected by the fire disaster.

Meanwhile, Bauchi State Governor, Sen Bala Abdulkadir Mohammed has pledged to provide quick intervention to those affected by the fire disaster at the Railway market in Bauchi metropolis.

The governor who made the pledge when he visited the market on Sunday, sympathized with the affected victims urging them to take it as an act of Allah.

He said that already the State Emergency Management Agency (SEMA) has conducted a needs assessment of the degree of the damages caused by the disaster with a view to providing them with relief materials.