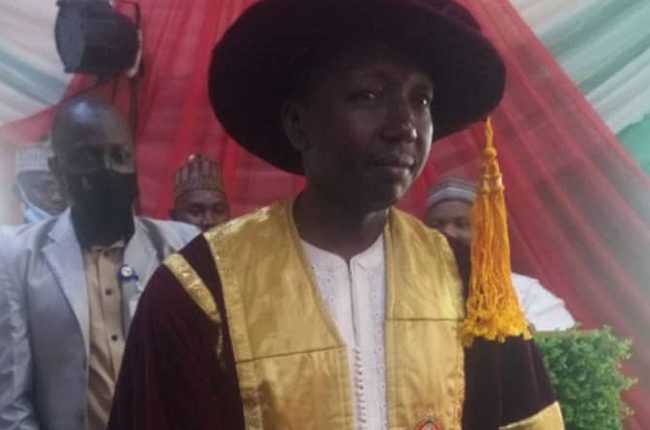 The pro-chancellor and Chairman governing council Federal University Gusau (FUGUS) in Zamfara State, Honourable Yissa Ezikiel Emmanuel has disclosed that among the 19 professors who contested for the position of Vice-Chancellor, Professor Muazu Abubakar has emerged.

Speaking during the formal handing over between the outgoing and incoming VC on Wednesday at the University in Gusau, the chairman governing council, Honourable Yissa Ezikiel said the due process has been followed during the selection which led to the emergence of Professor Muazu Abubakar.

“I appreciate the support of the management for their encouragement on the due processes followed during the selection of the new VC of the institution.”

He charged the new VC to work diligently for the progress of the University.

“You will be guided by the Senate and management of the University, I will not also interfere with the activities at all time as I may not be coming all the time.”

In his remark, the outgoing Vice-Chancellor, Professor Magaji Garba who was represented by VC Academics, Professor Balkisu Shinkafi disclosed that a lot of achievements were recorded by the former VC.

“Part of the achievements was developing a five years strategic plan for the University which includes the condition of service and students’ guides.”

He also secured the payment of land compensation to Farmers affected in the construction of the university and improve staffs strength of the institution.

The British Parliament at the Westminster Hall held a debate on ‘e-petition 554150, relating to Nigeria and the sanctions regime’ on Monday. The government of the United Kingdom has however responded…Prof Muazu emerges  Prof Muazu emerges

The surprise visit made on Friday night by the leaders of the ruling All Progressives Congress (APC) to former President Goodluck Jonathan at his residence in Abuja triggered a stir in the major political camps, resulting in at least four possible theories..Prof Muazu emerges  Prof Muazu emerges