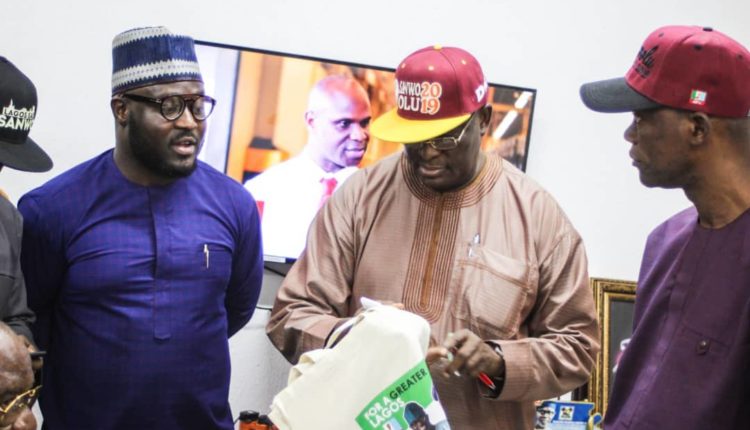 Share
The Aremo of Iworo Kingdom, Badagry, Prince Olu Kosoko, has donated campaign materials to the gubernatorial candidate of the All Progressives Party and other candidates in Badagry, Lagos State.
Kosoko, in a statement, said that as an African prince, he had the cultural responsibility to inspire, motivate and educate people, especially the youths. He stated, “I have the sincere love of my people in my heart and this has provoked my passion to do my own quota in human development. I am deeply inclined to participate in the democratic process of our great party  by donating to the governorship’s bid of Babajide Sanwo-Olu. I also got involved with my local constituency, Badagry, by pledging my support for and donating campaign materials to the candidates of the House of Representatives, Hon Babajide Hunpe, and the candidates of the two House of Assembly, Hon Ibrahim Layode and Hon Setonji David respectively.”
The United Kingdom-based media consultant stated that he was passionate about adding value to people’s lives and championing a new stream of youth leadership and engagement. Kosoko added, “At 22, I set up an NGO called Vanguard Initiative Foundation in 2004 to support and help the educational needs of the Badagry Division in Lagos State, which consists of Ojo, Badagry, Amuwo Odofin and Ajeromi Ifelodun.We successfully conducted a free five months’ tutorial to support secondary school students in Badagry and  Ojo Local Government for their Joint Admission Matriculation Board (Jamb) examination.
“We also gave Free Jamb forms to successful candidates. In addition to the tutorials and donation of Jamb forms, we distributed Free educational materials to primary schools in the Badagry and Ojo local governments.”
According to him, active citizen participation and collaborative youth engagement in governance is the future of a modern democracy.
He stated, “I believe that the youth can determine their future now through shared individual responsibility for the demand of greater governance rather than immediate financial gratification.”
“My team, Strategist Team, and I have  donated printed deskpads, curvy pen, printed button badges, specially printed air freshners, note pads, among others. We strongly believe that such materials will bring more brand visibility to the party candidates and attract a wider awareness, which we hope will result in massive votes for a victorious election.

“The underlying motivation of my donation to APC is to show my personal engagement in the governance as an individual and also as a royalty. We cannot leave governance to the government or the political party only; it is my belief that like-minded youths are to come together to contribute in any way to support their desired party candidates, rather than seek for immediate benefits.
“The Strategist Team will continue to positively engage with our political processes at all levels through our innovative and inventive ideas to create a new sense of youth engagement and responsibility.”
Share

Towards peaceful and credible elections