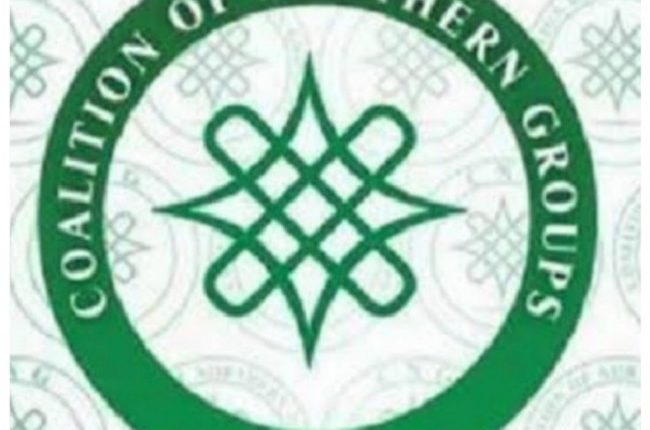 The Coalition of Northern Groups (CNG) has warned the ruling party, All Progressive Congress (APC), the People’s Democratic Party (PDP), and other parties to desist from zoning ahead of the 2023 presidential election.

CNG warned that any party that attempts to block the chances of Northern presidential candidates from emerging as flag bearers would be rejected.

Addressing journalists on Monday, in Abuja, the spokesman of CNG, Abdul-Azeez Suleiman said they find the move by the South to threaten Northern people’s right to franchise a deliberate attempt to bastardize democracy, cause greater instability in the guise of a contentious, undemocratic power shift arrangement and therefore downright unacceptable.

Presenting the group’s stand, Suleiman said “since democracy everywhere is a game of numbers, under no circumstance will the North succumb to intimidation, blackmail or threat from any quarter to abandon its collective franchise by not seeking the presidency in 2023 or any time in the future.

“That the northern population which is in the clear majority will never accept any presidential candidate who is the product of an undemocratic zoning process from whichever party.

“Call the attention of the northern public to get prepared and sensitized to hold any political party, by whatever name it is called that attempts to deny northerners the right to contest the presidency as an enemy of the North.

“To warn any political party that takes any step to block the window for the possible emergence of a northern presidential candidate shall be roundly rejected by the North.”

He said no conspiracy will stop the North from fielding a Northerner for the presidency in the PDP in 2023 irrespective of its recent body language that tends to block a northern candidacy by quickly zoning the national chairmanship position to the North which is unacceptable.

“The North shall definitely seek the presidential even if it holds the national chairmanship”, 2021 he added.

Furthermore, he said “we reiterate our call on Northern voters to mobilize against the sole concentration on party candidates and vote any credible, transparent, capable, and competent leaders.

“The CNG has resolved to expose the faces of identified unpatriotic northern traitors who have been paid huge sums of money to market southern candidates.”

Suleiman said that CNG has declared that the North, which he said is a major stakeholder in whatever happens in and to Nigeria, shall not be obliged to respect any zoning arrangement of any elective position in whatever party.

“As we categorically reject anything to do with any undemocratic process such as zoning, we urge all northerners to resist the antics and tactics of the self-appointed antagonists and hired cronies from the North who are today all over the place conscripted in the conspiracy to deceive northerners into abandoning what God has blessed us with; its human resources,” he noted.