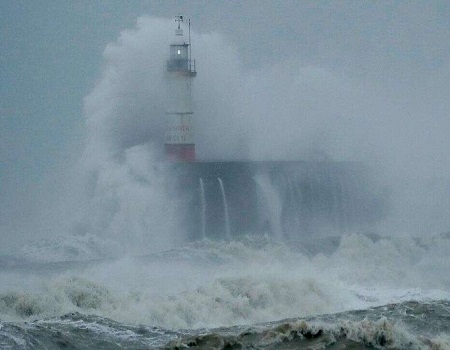 A fierce winter storm has left at least five people dead in Poland, Sweden, Slovenia and Britain, while air traffic was shut down in parts of Germany and power was knocked out to hundreds of thousands of homes across northern Europe.

In Poland, a 52-year-old woman and her 15-year-old daughter were killed on Monday morning after strong winds tore off a roof at a ski resort in Bukowina Tatrzanska, in the Tatra Mountains, according to police.

A 21-year-old woman was in severe condition and a 16-year-old boy sustained head injuries in the incident.

In Sweden, one man died and a second man was missing and feared dead after their boat overturned on Sunday on a lake in Svenljunga, south-western Sweden amid strong winds, police said.

A rescue mission was still searching for the missing man with the help of a helicopter.

A 58-year-old man died in the southern English county of Hampshire on Sunday after a falling tree crushed his car, police said.

Across Britain, the storm caused rainfalls over 24 hours, equalling the amount of water usually falling over a 45-day-period, flooding roads and inhibiting traffic.

A tree also fell on a car in Slovenia and killed the driver, the STA news agency reported.

The storm was moving east across the continent after first pummelling the British Isles and then mainland Europe, with hurricane-force winds causing trees to topple and damaging buildings.

Electricity networks firm Enedis said the storm’s passage had left 130,000 homes without power in France as of Monday morning.

Numerous fire-fighting operations were in progress to clear up the damages and debris left by the storm.

In Poland, the howling winds had forced more than 2,000 interventions by firefighters, mostly to remove fallen trees, according to a spokesperson for state fire-fighting services cited by PAP agency.

The storm also caused multiple transport delays and cancellations all over Europe until Monday morning.

The German airport Munich was particularly hard hit, with an airport spokesman in the southern German city reporting that 420 flights were cancelled.

Rail services were also interrupted across Europe. Deutsche Bahn, the German rail company, had suspended train services nationwide because of the storm.

It began resuming service again on Monday morning, except in the southern provinces of Bavaria and Baden-Wuerttemberg where the weather remains stormy.

The airline Eurowings also slowly began operating again from Munich at 10 am on Monday.

On Sunday, the storm had helped a British Airways flight from New York to London to set a new record: it only took 4 hours 56 minutes to cross the Atlantic thanks to the strong winds.