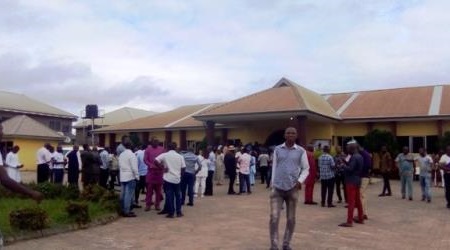 The sitting billed to start at 10:00 a.m was therefore put on hold temporarily following the power failure which threw the court into utter darkness.

TribuneOnline gathered that for about one hour 17 minutes, the judgement did not commence due to the generating set which developed a fault.

The tribunal chairman, Justice Sulaiman Belgore, thereafter announced the temporary suspension shortly after he led other Justices and made a formal introduction of members of the tribunal to the court.

It was gathered that the generating set had developed a fault from the outset on Friday morning as it was tripping off and on intermittently.

The house harbouring the generating set was said to have been overcrowded by party stalwarts in a frantic effort to effect a solution.

Party supporters, especially the People’s Democratic Party (PDP), were said to be pacing around the tribunal premises bewildered.

The state Attorney-General and Commissioner for Justice, Mr Peter Mrakpor, who led the PDP legal team among other commissioners and government functionaries as well as party faithful were seen in clusters making calls and chatting in low tones.

Earlier at the tribunal premises, members of the All Progressives Congress (APC) and PDP were sighted in heated arguments over sitting space.

The governorship Election Tribunal had slated the final judgement of the petition filed by APC and its governorship candidate in the last March 9, 2019, general elections, Chief Great Ogboru, asking for the nullification of the victory of PDP’s Senator Ifeanyi Okowa over alleged over-voting and other prayers.

We have saboteurs working against Buhari’s govt ― Osinbajo