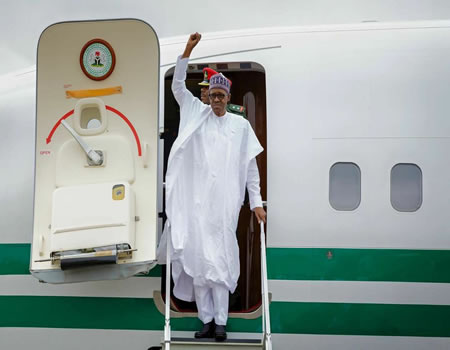 Some politicians, labour leaders and other Nigerians in the South-East have expressed happiness over the return of President Muhammadu Buhari from medical trip abroad.

In Enugu, the Buhari Support Organisation in Enugu State said his return had reinforced infinite confidence that life rest squarely in the hand of Almighty God.

The Organisation’s Publicity Secretary, Mr Eze Chibueze, said, “We pray that Buhari revolution aimed at laying a solid foundation for a transparent, prosperous and progressive Nigeria will be consummated,’’ he said.

Prof Osita Ogbu of Chukwuemeka Odimegwu Ojukwu University, Anambra, urged the president to consolidate on the gains achieved in his absence.

Ogbu, a professor of Law, said the past few weeks had witnessed remarkable improvement on infrastructure.

He said that the gains made incurtailing militancy and insurgency must be sustained.

Ogbu said that it was normal for the president to treat himself of any ailment when the need arises, adding that the Nigerian constitution anticipated such and that the president followed all provisions of law.

In Ebonyi, the state APC Chairman, Mr Eze Nwachukwu, told the News Agency ofNigeria (NAN) that the party and other well meaning Nigerians were happy and would continue to pray for good health and well-being of the president and his family.

Nwachukwu said that his return would rekindle the ongoing war against graft in the country.

The state NLC Chairman, Mr Ikechukwu Nwafor, thanked God for restoring the health of the president and his return to Nigeria after about two months treatment in the UK.

Nwafor said that workers in the state joined the rest of the country to felicitate with the president, his family, government and people of Nigeria for the successful medical vacation.

Also, the Catholic Bishop of Awka Diocese, Most Rev Paulinus Ezeokafor, prayed God to grant him strength to continue the work he was doing for the country.

“At a point, there were so many rumours, but we thank God that he is back.

“The president should now try to sustain the Naira which is already appreciating as well as maintain peace between the Fulani herdsmen and their hosts so that Nigerians will sufferless.

“He should also take more serious areas of our social life and interaction as a people, and more importantly, make his position clear on issues affecting the populace,” Ezeokafor said.

The cleric urged Nigerians to support the president as he could not rule the country alone, urging those around him to give him good advice for the common good of the country.

In Awka, Sen. Chris Ngige, Minister of Labour and Employment and a chieftain of All Progressives Congress, Mr George Muoghalu, told NAN that they were happy that the president was finally home.

According to Ngige, it is the Lord’s doing, we are happy the president is back home from medical check-up.

“We are human beings, like motor vehicles, we need constant checks on our health conditions. Thank God for preserving his life.

“It is the Lord’s doing. Whatever God destined in our life will happen, no man can change it, ’’ Ngige said.

In his reactions, Muoghalu, National Auditor of the APC, said that he was excited over the president’s return to the country.

“Thank God for his life and total recovery. I am sure Nigerians feels the same as I am now.

“The country is making progress; Nigerians are beginning to be happy under his regime. The Change we need has come,’’ he said.

Mr Chidi Akim, Public Affairs Analyst said “it is a welcome development which goes to show that God has answered the prayers offered by Nigerians for his safe return to the country against the false prophecies and rumours being branded by people who do not mean well for Nigeria.

“It also goes to show that government is not run by rumours and sentiments. It is important that individuals occupying public positions should be able to make responsibly statements over sensitive issues on national importance.

“I want also to commend the National Assembly for the high level of maturity and patriotism which they displayed in the face of the trial moment for our great nation.

“I also commend the Acting President, Yemi Osibanjo, who has displayed loyalty and competence.”

An Anambra-based industrialist, Chief Godwin Ezeemo, said his return had put an end to speculations regarding his health, and urged him to settle down to business as the country had missed him.

Ezeemo, however, urged Nigerians to learn to appreciate their leaders rather than praying for their deaths.

In Owerri, Mr Austin Chilakpu, NLC Chairman in Imo, said the the organised labour in the state was excited on the return of Mr President.

Chilakpu told NAN that God who made it possible for the president to emerge as Nigeria’s leader will equally see him through his tenure.

“It is a thing of joy that in spite widespread rumour of the death of Mr President, he still returned to the country alive with the media showing pictures on how he walked down from the aircraft,’’ he said.

He urged Buhari to come up with better policies to improve the welfare of Nigeria workers, saying that workers in the country were passing through difficult times in the face of biting economic recession.

“All we are saying as organised labour is that we are glad to welcome Mr President back to the country and pray that he settle down and return to his office with better polices that will enhance the welfare of suffering Nigeria workers,’’ he said.

Bishop David Onuoha, the Anglican Bishop of Okigwe North, described the return of Buhari as answered prayers by God’ and wished Mr President renewed energy to continue the good work he was doing in the country.

Onuoha said Nigerians of goodwill have not rested in praying for Buhari because of his numerous policies which had improved the country’s image.

“Such policies like the fight against corruption is one that I will like President Buhari to sustain because that has improved the image of Nigeria internationally,’’ he said.

In Umuahia, the state APC Chairman, Chief Donatus Nwankpa, said that “those who were making mockery of his health status can now bury their faces in shame.”

Nwankpa urged Nigerians to have a favourable disposition toward their leaders and to continue to pray for those in authority, saying that the president meant well for Nigeria.

Also, the Chairman, Inter-party Advisory Council, South-East, Chief Emeka Okafor, who is also the state Chairman of the Progressives Peoples Alliance, said that he was happy that the president had “finally come back to the country.”

The NLC Chairman in Abia, Chief Uchenna Obigwe, said that as a human being, “the president is bound to breakdown and when it happens, he should seek intervention from somewhere.