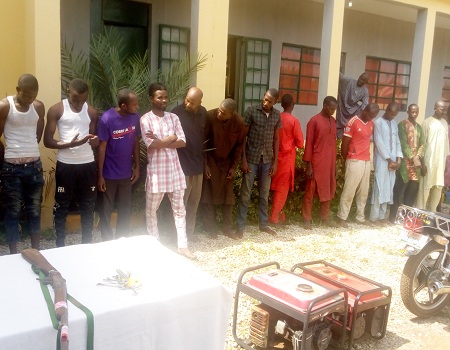 The Nigerian Police Force, Sokoto State command has paraded nothing less than twenty-six (26), suspects for various criminals activities at the State police headquarters in Sokoto on Friday.

The suspects who were paraded by the State Commissioner of Police, CP Ibrahim Sani Ka’oje, includes eight members of proscribed Shi’ites members arrested in Illeila local government of the State. The eight suspects were apprehended after exchanging gunshots with the police.

According to the DPO of Illeila police post, “they came out to celebrate Ashura day after when the Federal Government, as well as the Inspector General of Police, have warned them not to come out for any procession.

“In an attempt by the Police to disperse them, they open fire on us and even try to make away with one of our riffles, after engaging them, we were able to recover the riffle and arrested eight of their members while others escaped alongside one of our magazines”

The CP also paraded one Saifullahi Aminu and Yusuf Maidamma Yabo of Kano road area of Sokoto with two other suspects Abdullahi Bafarawa (Jokolo) of Sokoto and Shamsudeen Lawal  of Kano, both at large for allegedly lured one Khadija Adamu now deceased for immoral act to one Executive lodge in Koko road, drugged her to a state of unconsciousness before she eventually died at the State Specialist Hospital.

He announced that the command through a Court order has close down the said Executive lodge.

Also paraded is one Baito Na’alti, of Dalijin Village in Kebbe local government alongside his partner for allegedly dispossessed their victim, Alhaji Sani Maiwasha of Margai village in Kebbe with the sum of five hundred thousand naira (500,000), along the road in Tashar margai.

The CP further disclosed that same Baito Na’alti alongside one Kiruwa Shehu and Muhammadu Dangwanki, all of Kebbe local government for kidnapping Alhaji Janyo, Alhaji Dan-Dari and Alhaji Sarkin Fulani and forced them to pay the sum of 4m naira before regaining freedom.

He said, “Same Baito Na’alti was also said to have conspired with one Lawali Gairi and others now at large to invade the residence of one Hajia Gairi and robbed her of the sum of three million naira (3m).

“This one, Kabiru Bello of Manmade village of Gwadabawa local government area of the State for stabbing one motorcyclists, Aliyu Usman now deceased of Sultan Palace area in Nakasarin along western bye pass to dispossessed him of the motorcycle with registration number TWB 38 UQ, which was recover from the suspects.

“Kabiru Muhammad, Tukur Aliyu and Yahaya Abubakar, who conspired among themselves to steal Solar batteries before they were caught and arrested”

One Abdulsalam Muhammad of Marmarun Nufawa area of Sokoto was arrested for criminally lured his four years old son, Zaharradeen Isiyaku, into an uncompleted building and forcefully had carnal knowledge of him against the order of nature, while John Anthony was also arrested for attempting rape of a minor, Amina Dan Talatu, a 10 years old girl who he alleged to have deceitfully lured into his room and was caught naked in the room by good Samaritans.

CP Ibrahim Sani Ka’oje also paraded some suspected Indian hemp dealers in the state who was arrested in Raymond village, the suspects include Yunusa Abdullahi, in possession of  44 wraps of dried leaves, Bashar Mamman in possession on 2 cards of Tramadol tablets, 2 knives as well as sum of six thousands two hundred and fourty  five naira (6,245) suspected to be proceeds of hard drugs sales.

He further disclosed that one Abubakar Modibbo of Gaddace village in Kebbe local government was  arrested for threatening one  Kasimu Sani of same village with GSM No 09067327845 to provide huge sum of money as advance ransom, otherwise he would be kidnapped, the suspects also confessed calling the victim and the phone number was also recover from him.

Also arrested was Muhammad Bello of Kofar rini, who specialized in stealing generators and recovered two set of generators with one of them belonging to  Muazu Muhammad of Arkilla while the second was stolen from yet to be identified person.

The police commissioner warned members of the public to always be vigilant and reports any suspicious movement to the nearest police station. He warned criminals to desist from coming to the state saying his men are battle-ready to get rid of any criminal activities.

He commended members of the press for their role in making the state safe for all. He, however, call for more awareness on the dangers of sodomy which he described as barbaric and condemnable by all, he added.