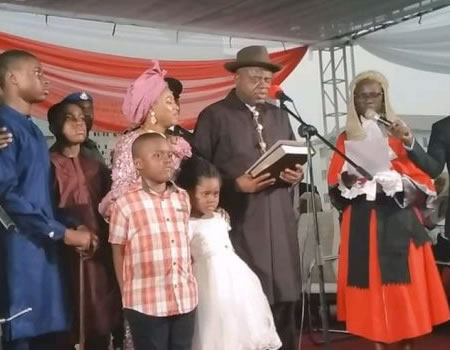 AS Senator Douye Diri took over as the new governor of Bayelsa State on Friday, the police imposed a curfew on the state following violent protests that trailed the ruling of the Supreme Court which nullified the election of the governorship candidate of the All Progressives Congress (APC), Chief David Lyon.

Briefing newsmen on Friday in Yenagoa after a meeting attended by heads of the various security agencies in the state, the state Commissioner of Police, Uche Anozie, said the curfew was necessary to curtail the security breach.

He announced that the curfew, which would take effect from Friday, would last three days between 8.00 p.m. and 6.00 a.m. daily, for the next three days.

Protesters believed to be APC members reportedly attacked the PDP secretariat in the state capital, a radio station and properties belonging to PDP leaders.

Eight suspects were reportedly arrested in connection with the protests.

The police commissioner warned that anybody caught violating the directive on the curfew would be dealt with in accordance with the law.

Diri, who was the candidate of the Peoples Democratic Party (PDP), took oath of office on Friday as the fifth democratically elected governor of the state.

The swearing-in ceremony, which was presided over by the Chief Judge of the state, Justice Kate Abiri, took place at the Government House, Yenagoa.

In his inaugural address, Governor Diri called on people of the state to put aside their political differences and work together as a formidable team.

He said the development of Bayelsa State should be of a major concern to the people of the state.

“Today is a day that the lord has made and it is marvelous in our sight. This is a state that we all wanted to create. Today, we have a state. Governors have come and gone. My advice to all of us in this great party of PDP is to be magnanimous in victory.

“Our promise today is to serve you. Like our immediate past governor will say: ‘he who serves men well serves God well’. We have come to serve you. Let us serve you”, he said.

Diri was sworn in alongside his deputy, Senator Lawrence Ewrhujakpor.

With the emergence of Senators Diri and Ewrhujakpor as governor and deputy governor, INEC will conduct Senatorial bye elections in Bayelsa East and West senatorial districts.

The chairman of INEC, Professor Mahmood Yakubu, made the declaration at a news conference on Friday at the commission’s headquarters in Abuja.

Yakubu said the commission had received the Certified True Copy (CTC) of the judgement of the apex court which disqualified the deputy governorship candidate of the APC and vitiated the joint ticket of the party earlier declared winner in the election.

The court also ordered the commission to declare as winner of the governorship election in the state the candidate with the highest number of lawful votes cast with the requisite constitutional (or geographical) spread.

“In compliance with the orders of the Supreme Court, the commission met this morning and reviewed the result of the election in which 45 political parties contested.

“Without the votes scored by the APC, whose candidates were deemed not to have participated in the election, the total number of lawful and valid votes cast in the election now stands at 146,999.

“Out of this figure, the candidate of the PDP scored the highest number of lawful votes with 143,172.

“Similarly, the party has scored more than 25 per cent of the lawful votes cast in all the eight local government areas of the state.

“Furthermore, the total number of registered voters in places where election was not held or cancelled as a result of sundry violations is 90,822. The candidate of the Accord party has the next highest score with 1,339 votes.

“The margin of lead between the candidates of the PDP and the Accord party is 141,833 votes. With this outcome, the election is conclusive at first ballot.

He said detailed result would be uploaded on INEC’s website and social media platforms shortly.

He said the commission was aware that the tenure of the incumbent governor of the state ended at midnight Friday, February 14.

“Therefore, in fulfillment of the requirement of Section 75 of the Electoral Act 2010 (as amended) the certificates of return to the governor and deputy governor-elect will be presented to them immediately as ordered by the Supreme Court,” Yakubu said.

Speaking shortly after receiving the certificate of return from INEC National Commissioner, Legal Services, May Agbamuche-Mbu, Governor Diri thanked the judiciary for living up to its mandate as the last hope of the common man.

Making veiled reference to the crisis in his party, the PDP, he said God had taught every stakeholder in the party a lesson.

He promised to initiate a reconciliation process so that the party in the state could return to being a united political family.

“I want to thank God who made this possible. I want to appreciate the commissioners and staffers of INEC. I won’t forget those God has used for us to be here today, the judiciary, the last hope of the common man. God has taken us through a winding road and He has taught us a lesson of reconciliation and love,” Diri said.

The APC, on Friday, staged a protest in Yenagoa over the judgment of the Supreme Court that nullified Lyon’s election and a pronouncement by INEC that Diri of the PDP be sworn in as the governor of the state.

The court urged INEC to withdraw the certificate of return issued to them and reissue same to the next party with the required constitutional spread.

The News Agency of Nigeria (NAN) reported that several supporters who gathered at the state secretariat of the APC and the popular Tombia Junction marched to the government house and stadium, venue set for the inauguration of the new governor.

The protesters carried placards with different inscriptions such as ‘No David Lyon, no governor’ and ‘We will not allow our votes to get lost’.

The protesters obstructed traffic in major roads in the state as well as blocked the Kaima end of the East-West Road and made bonfires on roads and at junctions in the state capital.

The secretary of the APC in the state, Mr Alabo Martins, said the protest was to register their grievance over the Supreme Court ruling sacking Lyon.

“We have to tell the whole world that we will not agree until Lyon is sworn in.

“This is a peaceful protest and we are doing it to ensure that state has good governance,” Martins said.

The national chairman of the PDP, Mr Uche Secondus, urged Governor Diri to immediately go for reconciliation in the state.

Secondus gave the advice on Friday when Diri and his deputy, Ewhrudjakpo, presented the party leaders their certificates of return at the PDP campaign office in Abuja.

The PDP chairman, who dedicated the victory to God, said it was time for the people of Bayelsa to come together for reconciliation.

He said: “This is the time to establish the truth and reconciliation committee for the benefit and genuine reconciliation of all Bayelsans. There will be no victor, there will also be no vanquished.

“So, we urge the new governor-elect and deputy governor-elect to quickly go to work; embrace everyone, regardless of their lineages or parties, because this is what the PDP represents.

“We believe in the rule of law and our matters are very clear. If it is on point of law, no argument, no protest; if it is not point of law, we will ask question.

“We do not just make protests or argue or issue statements on ordinary ground. If we have ground, we will ask. On this matter in Bayelsa State, it was on point of law and the rule of law has taken place.

“God has given you power, not man. So, go and be good ambassadors of the nation, your state and the party. There shall not be rancour.”

Secondus urged Diri to call all the elders and youth of his state together to work.

“It is not about party, but the service you are going to render to the people of Bayelsa should be uppermost in your mind, and that is how to build a nation.

“We are in together to work with you and we believe that as you go back now for the swearing-in ceremony, all Bayelsa people will give you the necessary cooperation,” The PDP chairman said.

Earlier, Diri said he and Ewhrudjakpo were at the office to present their certificates to the party leaders.

The immediate past governor of the state, Dickson, ascribed the verdict of the Supreme Court which returned the candidate of his party, Diri, as the governor, to the mercies of God.

Dickson commended the judiciary for its courage and adherence to the ethos of the law profession.

He said the bold decision of the judiciary gave so much hope in the country.

The former governor also thanked the Bayelsa people, all Nigerians of goodwill and the clergy for their support and prayers throughout the period of pre-election dispute in the court.

He said in a statement by his Chief Press Secretary, Mr Fidelis Soriwei, that that the victory was not just for the PDP but the whole of Bayelsa and the entire Ijaw nation.

He said there was no winner and no vanquished in the Bayelsa governorship tussle, adding that all Bayelsans had a duty to ensure that law and order did not come under threat in the state.

He said while disagreements are normal in politics, the actors must display the maturity to move on when the matter gets to the apex court and judgment delivered on it.

The former governor said nobody should be molested or persecuted as fallout of the judgment which returned the PDP candidate as the governor of the state.

INEC, APC in war of words over Bayelsa: You erred in presenting certificate to Diri —Oshiomhole