• My sacking is a failed coup ― Hon. Gombi 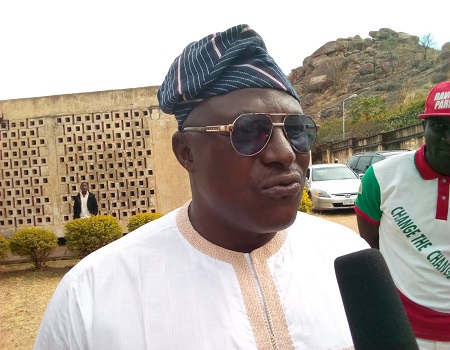 Barely one week after Hon. Amos Gombi took over as the acting Chairman of Plateau State People’s Democratic Party following the resignation of Hon. Damishi Sango, the State Executives Committee (SEC) of the party on Monday sacked the acting Chairman thus fictionalising the party.

Even as the acting Chairman described the action of SEC as a charade, a failed coup and a ploy by a section of the party members to take over the party through the back door.

It would be recalled that the National Secretariat of the party recently resolved the impasse in the party and directed the State Chairman Hon. Sango to resign and handover to his deputy, Hon. Amos Gombi.

Addressing newsmen after a meeting of the State Executives Committee, the senator representing Plateau North, Senator Istifanus Gyang said the Constitution of PDP stipulated that the zone which produced the chairman that resigned should be the one to produce his replacement.

“The North zone which produced Hon. Sango that resigned in compliance to Section 47 (S6) of the party constitution and came up with the resolution of nominating Hon. Chris Hassan. The nomination was sent to the State Executives Committee which rectified it today.

” We have not done anything outside the Constitution of the party, the SEC met and approved the nomination, the name Chris Hassan will be forwarded to the National Working Committee for final approval,” he said.

Apparently reacting to his purported removal, the acting Chairman Hon. Amos Gombi said the development could be likened to a coup, adding that the National Secretariat of the party last week issued him a letter to run affairs of the party for the next three months before another Congress will be conducted.

“I was out of town when this incident happened, I could recall that the Secretary of the party called that there was the need to call for a meeting of state executive of the party which I declined and told him to wait for my arrival but to my surprise, he called for the meeting which was held today.

“However, it was a failed coup because no local government Charman of our party was in attendance. The process is that I finish the tenure of Sango based on the directive from the National Working Committee. The party has not changed it’s position on zoning, I am from the Central zone, I cannot contest for the chairmanship of the party. My job is to lead the party to the Congress which is expected to come up in three months time” he said.

Meanwhile, the development has polarised the party along with the two prominent members of the party, the leader of the party Senator Jeremiah Useini and former governor of the State Senator Jonah Jang.

Immediately, after the pronouncement of Hon. Chris Hassan, there was a fracas at the State Secretariat of the party between supporters of the two camps. It took the intervention of the security agencies before normalcy could be restored to the party Secretariat.