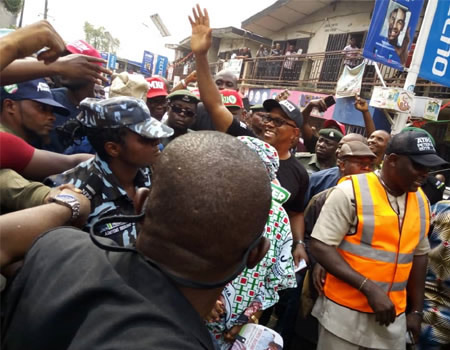 The duo, who had in their entourage the party’s deputy governorship candidate for Lagos, Mrs Haleemat Busari, the legislative candidates, among others, were in  Computer Village in Ikeja, Ladipo Auto Spare Parts Market in Ladipo, FESTAC Town, among other, where they rallied traders’ support for the party and all the candidates that were fielded for the coming polls.

Addressing the traders at the Computer Village, Obi placed the blame for country’s economic downturn on the All Progressives Congress (APC)- led government, who he said lacked the capacity to manage businesses.

He assured that the PDP government would bring about a robust economy based on business background possessed by the party’s governorship candidate, Mr Agbaje and himself as his running mate.

“How can a man who does not have a shop aspire to be the chairman of the traders in the market?” Obi asked rhetorically at the Computer Village, adding: “I have always been a trader. You know that Jimi Agbaje too is a trader. So we understand your needs.”

Nigeria’s problem, according to him, began when her administration was placed in the hands of people who neither participated in nor understood business and trading.

“You know that the Vice President runs the economy. With me, you have someone who understands business and understands your need,” Obi added further.

Speaking further, the PDP vice presidential candidate described ICT as the future of the world, saying that Nigeria’s exchange rate would regain health when the country became an exporter of computer technology.

Speaking, Agbaje blamed the Lagos State government for Google Corporation diverting to Ghana and Uganda a plan to provide free Wi-Fi in all schools, pointing out that, if the scheme had succeeded, it would have created more business for Nigerians in the sector.

According to him, if all the schools in the state should have free Wi-Fi, the Computer Village would also have benefited, querying: would that not have been so?

He said that it had been proved that when internet use increased by 10 per cent, the GDP of the benefiting country rose by 3.8 per cent, describing such as a significant addition to the economy.

According to him, the current regime in the state had put stumbling blocks of corruption to telecommunications companies and had failed to appreciate the impact ICT would make on the economy of the state.

Criticising Lagos State’s current tax system that had given room for multiple taxations, the PDP governorship candidate assured the business representatives that his government would put in place a tax regime that would eliminate double taxation.

While lamenting lack of improvement in Ladipo Market since his last campaign visit in 2015, Agbaje promised that he would not indulge in the current APC’s government rhetoric of threatening to shut down the market, but rather he would improve access roads and facilities in the market.

On the refusal of President Muhammadu Buhari to sign the amended Electoral Bill into law, Agbaje, expressed misgivings about the development, recalling that after the 2015 elections in Lagos, PDP had headed to the Electoral Tribunal, Appeal Court and Supreme Court, which all ruled that card reader machines were compulsory for an acceptable election.

He said his case on the 2015 governorship election, in which Mr Akinwunmi Ambode was declared the winner, had been based on the premise that contrary to the Independent National Electoral Commission (INEC) regulation, the election had been majorly conducted without card readers and, therefore, should be declared null and void.

However, the Supreme Court finally ruled that although the INEC regulations approved the use of card readers, the method lacked the backing of any extant law.

Upon this, he said that the National Assembly passed a law to back the use of card readers that President Buhari had presently refused to sign.

Speaking earlier, the General Chairman of the Ladipo Auto Spare Parts Market, Mr Jude Nwankwo, in his address, lamented the neglect the place had suffered neglect from the current regime, saying that the government in the state did not have the interest of the traders at heart.

While assuring that the PDP once voted into office would address the plight of the concerned traders,  Nwankwo said Alhaji Atiku is a businessman while Obi, his running mate is a trader to the core, who he contended were in a better position to profer solutions.

“Atiku is a businessman and Obi is a trader to the core, once they get there, they would not forget,” he said, even as he recalled the support the Ladipo Market traders enjoyed from Anambra State when Obi was governor.

Nwankwo assured the PDP governorship candidate, Agbaje of the traders’ continued support, describing him as next governor of Lagos.

Obasanjo rigger without peer, at war against his own deeds —Tinubu