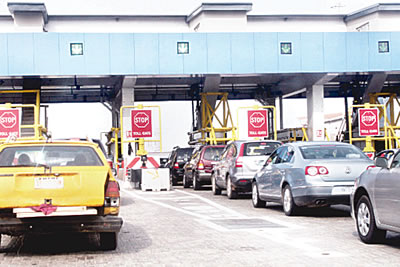 No one can really understand why successive governments in Nigeria chose to impoverish their people and make life and living extremely difficult for all. It is always one wrong headed policy to another leading to confusion, inconsistency, lack of foresight and general embarrassment to investors and the populace. Toll gates were introduced decades back when the glamour of the then newly constructed Lagos-Ibadan Expressway impressed the citizenry and we all appreciated the need to keep such beautiful edifice going through regular maintenance. The Sagamu-Ore- Benin Expressway was also considered worthy of similar maintenance. But years along the line it was discovered that the huge monies pouring into the covers of all the agencies and contractors administering the tolls were emptying into kleptomaniac drain pipes.

If ever there was any decision Olusegun Obasanjo ever got right, it was the scrapping of the toll gates in 2004. President Obasanjo submitted that the whole idea was catastrophic as the revenue coming in from the tolls was less than 10 per cent of the total money collected. Besides, he added for emphasis, no real maintenance was being carried out on roads being tolled. It is very obvious that nothing has changed since 2004 to warrant the proposed re-introduction of toll gates on federal highways. As a matter of fact there are no highways worthy of that description in the country today as the so-called highways have become dilapidated and horrible to sight. The unitary government being run in Abuja should consider the following thoughts before imposing unnecessary and reckless toll gates on the suffering masses of this country. Transportation is one service that touches on the lives of every citizen in the land; the poor, the rich, the educated and the uneducated, the farmer and the engineer, the tenant and the landlord, the fisherman and the carpenter, the sick and the healthy, the transporter and the passenger, the teacher and the student; everybody.

It should therefore be realised that any ill-digested policy concerning transportation would have domino effects on everything in the land including the living standards of the people. Toll gates would immediately make transport fares to skyrocket. Cost of fuel has already done incalculable damage to our purses and wallets and those who transport foodstuffs to towns and cities are bearing the unbearable brunt.

We have tried the toll gate idea as means of getting funds to maintain our roads. It never worked. What magic is the government now about to perform that would make it work? What will change the corruption-infested system of running the toll gates? Which contractors and agents are we importing from heaven [if there is a place so called] that will manage the tolls? Countries that institute toll gates usually have alternative routes for those who cannot afford tolls or who are not in a hurry to ply the Expressway. In Canada for example there are so many toll-free highways that hardly does any one need to bother about 407 Tolled Expressway. You have several alternatives in Highway 7, Highway 10, and Highway 16 which are forever free and fast as well as other major roads like Steeles Avenue that will carry you as far as you can go. Going to Ibadan from Lagos the only direct route is the Lagos-Ibadan death trap erroneously called Expressway. It is neither a way nor an express!

The one crucial reason why we should not even think of tolling any major trans-national road is INSECURITY. Toll gates would create huge gridlock and long queues which would be a bazaar for armed robbers and kidnappers especially in the early hours of the day and in the late evenings and nights. How many police men and soldiers are we going to deploy to man the toll gates? How cost-effective is the huge amount to be invested in constructing new tolls and providing security? Government must find alternative sources for funds to maintain our roads. By the way, what has happened or is happening to the humongous monies being trumpeted every day as recovered loots? Nigeria on daily basis receives huge sums of money from Customs and Excise, from port duties and charges, from VAT, from Oil and Gas and from other numerous sources. Those running the economy of the country should prioritise and allocate funds to road construction and road maintenance. Toll gate is not the solution.

It is shameful and disappointing that the two major bodies one would have appealed to for support in campaign against toll gates are the ones that are actually behind this anti-people proposal. The National Assembly and the Road Transport Employers Association of Nigeria must de-worm themselves of parochial self interest and do a rethink on this burning issue of toll gates. We know some of them are going to provide contractors and agents. But should they because of their pockets ruin the wobbling economy of the country and sentence the citizens to anguish and misery?

What the unitary government is about to plunge Nigerians into is executive extortion. There is no other name for it. Toll gates will soon turn into markets, slums, beggars’ joints, kidnappers/armed robbers/ritual killers/pick-pockets dens and of course a collection centre for ‘wetin you carry’ police men and misdirected Customs officers. Nigerians say a loud and unequivocal NO to re-introduction of Toll Gates and invite the Government to PERISH the thought.

Of segregation in Kaduna