PENGASSAN, NUPENG threaten to shut down operations over IPPIS, non-payment of salaries 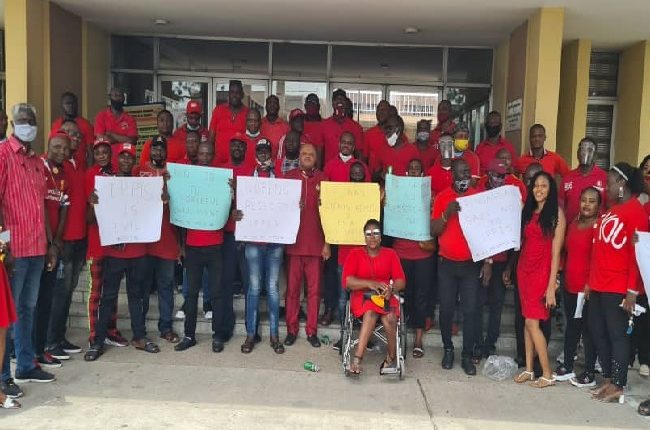 They warned that if by Friday the Federal Government did not yield to their requests, they would shut down oil operations come Sunday.

It will be recalled that the workers had, earlier on Wednesday, begun a peaceful protest with a three-day warning strike, but went on a full-scale protest match at the Petroleum Training Institute (PTI), Effurun on Thursday.

The protesters wore red T-shirts and were armed with placards with inscriptions such as “Release Our Salaries Now or No Dialogue,” “No To Forceful Enrollment into IPPIS,” and “We Are Not Against IPPIS but Create Another Platform That Addresses Our Peculiarities.”

Vice-Chairman, PENGASSAN, Warri Zonal Council and Secretary of Regulators Forum, Prince Audu Oshiokhamele, during his address, warned of dire consequences if their salaries were not released by Friday.

According to him, “I want to assure you, our Union members, that if our salaries are not released before Friday (today), by 12 midnight, on Sunday we will shut down the whole nation.

“What we are just doing now is a warning protest but by Sunday, the music will change.”

Prince Oshiokhamele, who was in the company of Mr James Esiomor, PTI branch Chairman of PENGASSAN and Mr Ejokirhie Jahpurpose, Chairman of PTI branch of NUPENG, wondered why the Federal Ministry of Finance claimed ignorance of non-payment of their salaries in the last three months.

“We are surprised that the Ministry of Finance, on Wednesday, denied that they are not aware that our salaries have been stopped.

“Why they are making every efforts to see how they can placate the Union. They can’t placate us until our salaries are paid,” he said.

He suggested that the only solution to their threat is for the Federal Government to pay the salaries of the protesting workers latest Friday before the unions can reconsider returning to the negotiations table on the issue of IPPIS.

Prince Oshiokhamele noted that the unions are clamouring for the creation of another platform that will take care of peculiarities in their operations and are not against IPPIS.