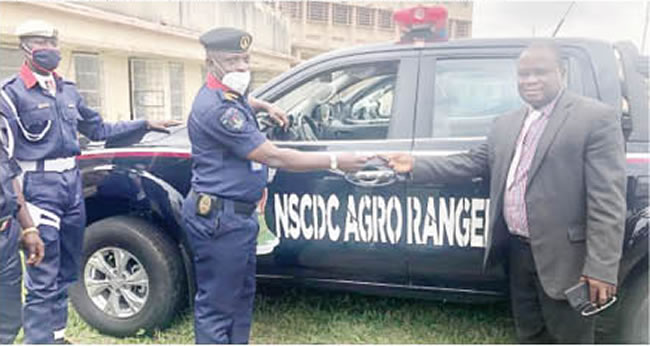 THE Agro-Rangers squad, a unit under the Nigeria Security and Civil Defence Corps (NSCDC), Oyo State Command, has lauded the state governor, Mr Seyi Makinde, for the donation of operational vehicles to the squad.

Agro-Rangers, is a special security unit created to protect farmers and agricultural facilities around the South-West part of Nigeria of which Oyo State is not an exception.

Commander of the squad, Supritendent Emmanuel Olusola Aluko, while speaking with the Nigerian Tribune by phone, described the governor as someone who makes agriculture one of his top priorities and working effectively towards its development.

He noted that: “I want to on behalf of other members of the squad as well as farmers in the state commend the governor for the timely release of the vehicles as it would further strengthen our mode of operation. It is also worthy of commendation that governor Seyi Makinde is the first among the South-West governors to respond to the numerous needs of the Agro-Rangers squad.

“Let me also appreciate the Oyo State Commandant of the NSCDC, Iskilu Akinsanya, for his support all this while. However, while we are thanking the governor for the new vehicles, we want to plead for more support as we still need motorcycles to penetrate areas where vehicles cannot get to.

“Also, we need military tent and power generating set for our use when we are inside the bush particularly at night as we normallly put up inside the vehicle. If we get all these, the economy of the state would improve as security of lives of farmers and agricultural produce would be guaranteed, investors would be attracted and government would record more revenue as it is a known fact that agriculture is a major sector of the economy.”

Aluko, further stated that, aside the aforementioned, food security would be guaranteed and the fear of attack on farms by herdsmen would be a thing of the past.

Also speaking with the Nigerian Tribune, Farmers Ambassador, Oyo State, Azeez Maboreje, thanked the Oyo State Government under the leadership of governor Seyi Makinde, for the support farmers in the state have been enjoying, while urging the state government not to relent.

He, however, called on other governors in the South-West to toe the path of governor Makinde, adding that doing this will encourage farmers to do more, thereby resulting to food sufficiency in the region and Nigeria as a whole.

Maboreje, also noted that the current climate change being experienced has caused food shortage, adding that famine is imminent, while positing that only support from government can help mitigate the effect of the looming food crisis.

He thanked Agro-Rangers squad for its support for farmers, while also calling on government to continue its support for the security outfit, saying that effort by the squad had been a saving grace for farmers in the face of attacks from herdsmen who attack farms within Oyo state and the entire south-west.

Farmers charged on contributing to Nigeria’s growth through agric export