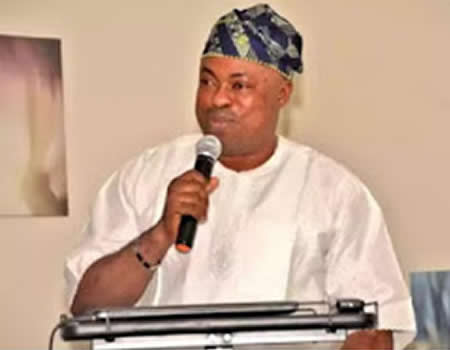 Share
The battle for the speakership of Osun State House of Assembly was on Thursday laid to rest as Hon Timothy Owoeye, the lawmaker representing Ilesa East State Constituency, emerged as the Speaker of the state legislature.
Owoeye’s emergence as the Speaker of 7th Osun State House of Assembly followed his adoption on Wednesday at the country home of the former acting national chairman of the All Progressives Congress (APC), Chief Bisi Akande in Ila-Orangun, where the immediate past governor of Osun, Mr Rauf Aregbesola and other party stalwarts were present.
The lawmaker, who was elected unopposed during the first plenary session of the legislature after its inauguration by Governor Gboyega Oyetola is believed to have enjoyed the backing of Aregbesola.

The APC has majority members in the new assembly with 23 members as against 3 for Peoples Democratic Party (PDP).
The legislator, representing Ife North State Constituency, Hon Tunde Olatunji nominated Owoeye, who is a fourth term lawmaker as Speaker and was seconded by Hon Elizabeth Abioye from Ifedayo State Constituency.
Owoeye, who served as the majority leader of the 5th and 6th State House of Assembly. was born on 24th August 1972. He graduated from the then University of Ado-Ekiti (now Ekiti State University) with a degree in Political Science in 2005. From 1999-2002, he was a councillor, Ward 10 of Ilesa East Local Government. He has been a member of the State House of Assembly since 2007 and he served as the minority leader in the 4th Assembly.
osunowoeyeSpeaker
Share FacebookTwitterGoogle+ReddItWhatsAppPinterestEmail

German nurse responsible for killing 85 patients gets life in prison