‘Our coping strategies for stomach infrastructure’

Features
By FUNMILAYO AREMU and ADEOLA OTEMADE On Dec 5, 2021 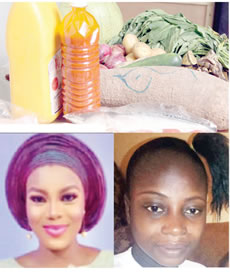 FUNMILAYO AREMU and ADEOLA OTEMADE report that amidst rising costs of food items across
the country, Nigerians have been devising different coping strategies at home in order
to eat decent meals just to survive the harsh situation.

Amidst the rising prices of foodstuffs and growing poverty, many Nigerians have started devising other methods and becoming creative in their diets to get the best out of the meagre foodstuffs they can afford. For instance, while the popular Yoruba yam flour meal (amala) and Semovita have become quite expensive, many Nigerians have discovered creative means to fill their stomachs with cheaper alternatives.

Speaking with Sunday Tribune, Adenike Muhammed, said she has devised alternatives to some of the food she serves in her house because of exorbitant prices of foodstuffs.

“After I realised that yam flour (elubo) is expensive for me, I devised a means of buying cassava flour (lafun) and mixing it with ground maize, which gives me semovita and is also a great replacement for amala.

“In order to survive, I have reduced the way I eat; I still eat rice, but not as much as I used to. I have completely stopped eating beans, as well as noodles because I simply cannot afford it; it is too expensive. I have switched to eating potatoes because it is cheap and easier to cook,” she said.

For Oluyemi Otemade, a retired civil servant, what she did was to cut down her food demands. For instance, she disclosed that she has partially removed beans from her diet because at N1,500 per bowl, she can no longer afford it. According to her, she no longer buys in bowl, she now buys about five cups and cook with rice.

“I had to remove beans from my food timetable because a kongo of beans was N1,500. I refilled my gas cylinder of 12kg at N8,000; pepper is expensive; palm oil is expensive. A kongo of rice is N1,000 [depends of brand]. A tin of milk is now N270; one cannot even afford to take tea again. I had to cut my expenses according to my income,” Otemade narrated.

For Wunmi Akinbulijo, she used to live a life of luxury, eating whatever she desired. But now, she has switched to a low budget lifestyle.

“Everything is just hard,” she stated. “I used to eat expensive soups, but now I take okro soup [ilaalasepo]. It is within my capability. I hardly stock my fridge with drinks like before. I eat more stale stew, as I buy pepper in bulk because it is cheaper, then I blend, cook some and store the rest in the fridge. The same thing with meat.”

Another Nigerian, Mrs Stella Awotunde said she has changed her diet from rice to something else.  lamented on the incessant hike in food prices.

“How will I buy a kongo of rice for N1000 and it won’t last for more than two days when I used to buy it for about N300 or N350? I have switched to eating white beans, otherwise known as Sokoto. I have also switched from rice to unripe plantain, which I even discovered is more nutritious. I recently started eating pondo (pounded) potato because it is cheaper. I eat moreeba now than I used to,” she explained.

Ayodeji Alabi, a human resources manager, said he has been surviving by creating reasonable  balance between his income and food needs.  Speaking with Sunday Tribune, he admitted that situation in the country harsh. “It has not been easy to cope. It has just been by the grace of God that we are surviving this time. The quantity of groceries and foodstuffs you get for N5,000 before is almost N20,000 now. It’s that bad,” he lamented.

On how he has managed to cope, he explained that he has had to improvise on his food demand. According to him: “In a way, I have had to look for alternative to some items, replace some with those of lower quality in order to get the desired quantity at a relatively cheapercost to that of quality products. I just forgo some of them totally till, maybe, when there is excess funds for them. Since income has not increased, not even one bit, there would definitely have been a sort of balance if as the prices of food increase, the salary increases too.”

Speaking on the way forward, Alabi suggested that food sellers and suppliers should be honest and not hike their prices simply because the imported ones are expensive.

“Well, I believe the nation can actually do better. Citizens can do better because most of these foodstuffs are planted by indigenous farmers, even though we are aware of the fact that some are imported goods. But I believe the indigenous ones are supposed to be cheaper and much more affordable, which should help alleviate this hike in prices, but the reverse is the case. They either sell them at the same rate with the imported ones or even higher sometimes in order to make maximum profit which I term selfish,” he said.

Esther Adegbaju, a business woman, has stopped buying food items in bulk as she used to do because they have become quite unaffordable for her. Speaking to Sunday Tribune on how she has been coping with feeding her family in the face of costly food items she said: “I stopped buying yam flour and have since replaced it with red guinea corn and cassava flour. It gives me the same result as yam flour would give me.

“For my baby, I have stopped buying a baby formula; I now grind maize, crayfish, guinea corn, soya beans and dry fish together, to make a replacement. The end product is the same, in fact, I discovered that my replacement is even more nutritious than the formula. I also cook my beans very watery and use it to eat Eba; it is not the normal gbegiri, but I love it.

For Faith Oduola, a teacher, she has also stopped eating amala made with yam flour, replacing it with plantain flour. In her words, “Yam flour has become too expensive and I found out about this from my friend. So, what I do is, I buy unripe plantain, dry it and grind it to make plantain flour for amala. It is almost the same as using yam flour.

Adufe Tolami, a nurse, has also readjusted the content of her consumption in order to survive the trying time. I no longer buy melon (egusi), I use ground soya beans to replace it. I have also been eating soya bean cake (wara) instead of meat; it is equally nutritious. I also mix egg with pepper and seasoning, boil it in a moin-moin pan, cut and cook in my stew as meat, and it is very delicious.

Family and guest entertainment has also taken a new dimension. Since soft drinks and other beverages had become more expensive, Tomiwa Meroyi, an entrepreneur has also devised new strategies to entertain her guests, including her family in a cheaper yet interesting way.

According to her, “Ever since beverages and other carbonated drinks got expensive, I often make kunu, zobo and even soya milk to replace it. I found that it is actually safer,health-wise, than consuming carbonated drinks. So, as for Jollof rice and my stew, I use tomato paste and dry pepper, instead of using chili, bell pepper, the normal pepper and fresh tomatoes. Using ground pepper (atagungun) and tomato paste is less expensive and quite easy to make.