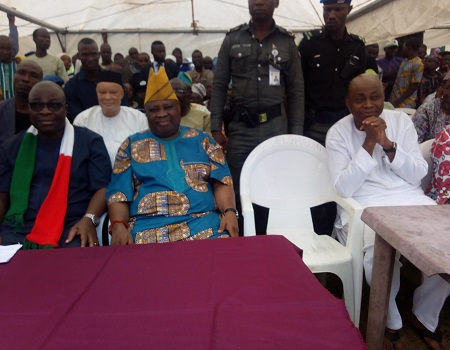 AGAINST the build-up to September 22 governorship election in Osun, the reconciliation between the camp of the Peoples Democratic Party (PDP) standard bearer, Senator Ademola Adeleke and Dr Akin Ogunbiyi was solidified on Friday when the latter collapsed his structure to shore up the electoral chance of the party ahead of the exercise.

TribuneOnline authoritatively gathered that the movement to Ileogbo and Iwo for campaign was parts of the contents of peace pact signed by the duo of Ademola Adeleke and Dr Akin Ogunbiyi after the Senate President, Dr Bukola Saraki brokered truce to end the misgiving over the outcome of the PDP’s primaries held on July 21.

While addressing chieftains and members of the PDP, who converged on his community in Ile Ogbo, Ogunbiyi, who spoke in Yoruba said “there will always be misunderstanding in politics, but peace can only be restored through dialogue at the roundtable. It is only God that can put somebody in any position. Two persons cannot be governor at the same time. It is the success that is important. There is no Paul or Apollo. PDP is one in Osun.

According to him, “let us collaborate for victory by doing the needful in our local government, wards and units for the success of our party. The glory and success of this man (Adeleke) is our collective success. The people of Osun State are waiting for us. Our people are disenchanted because of failure and mistakes of the APC. We cannot afford to disappoint them.”

Ogunbiyi continued, “the success of Adeleke is the success of the PDP in Osun and Nigeria as a whole ahead of 2019 general elections. Let us monitor our votes from the polling units to collation centres and to final announcement in Osogbo. As we have started this journey, we would end it with success on September 22, 2018.”

However, while speaking at a joint press conference held inside Ogunbiyi’s residence in Ile Ogbo, before departing to Iwo for a mega rally, the PDP’s flag bearer, Senator Ademola Adeleke expressed optimism that his chances were now brighter with concretisation of peace and reconciliation with Ogunbiyi’s group.

In his remark, the state chairman of the PDP, Hon Soji Adagunodo contended that the reconciliation between the duo would sadden Governor Rauf Aregbesola and the APC in Osun, saying with this development has further brightened the chances of the PDP, winning the coming poll.

Our administration will put in place policies to stimulate growth, development of…