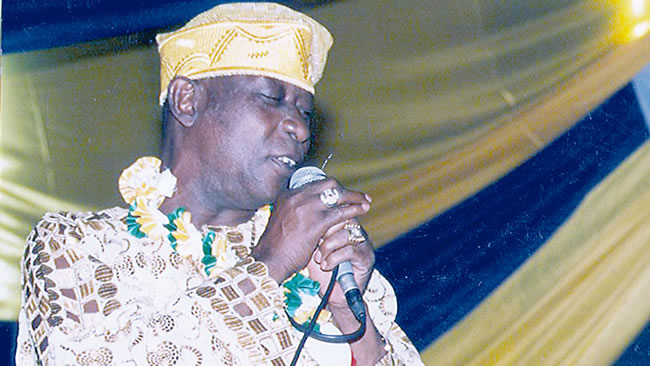 Members of the family of the late music icon, Stephen Oladipupo Olaore Owomoyela, popularly known as Orlando Owoh, have relived their fond memories of the deceased at the 12th remembrance ceremony held at the Agege Lagos residence of the late highlife musician.

One of the wives of the deceased, Madam Caroline Owomoyela, who spoke at the ceremony, lauded the guests for great affection and support shown towards the family of the deceased.

Madam Owomoyela disclosed that things have not been the same since the demise of her husband whom she described as a cheerful giver. Caroline added that promises made by some close friends are yet to be fulfilled.

“It has not been easy since he passed away. He was the breadwinner when he was alive. Things were going on smoothly when he was alive but things have not been the same since his death. Although, his record label used to support the family financially before the CEO passed on.

“God has been our rock ever since but if his well-wishers or government can support in any way, then we will be grateful,” she said.

Also speaking, the family’s project coordinator, Omooba Femi Akinrinwa, called on the government to support the widows of the late music icon.

Akinrinwa said Orlando’s wives are aged and cannot do much work, although their kids are making commendable efforts

“The music is going on well, but according to his wife, the man marketing his music gold so old could not go further but they wanted to give the master to another promoter in America to continue marketing it so that they too can have their royalties.

“Some people promised the family, but nothing has been done yet. The wives are old and cannot do much again. Some of his kids who are also into music are trying but not yet known.

“This is the time the government can alleviate the suffering of the wives by assisting them, by taking care of their welfare and other things to assist the family,” Akinrinwa said.