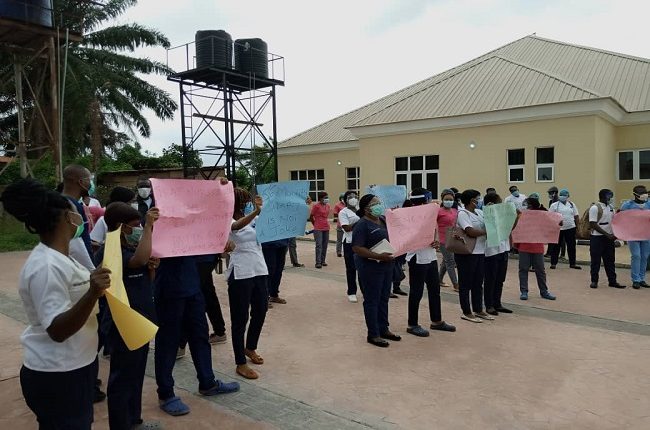 Nurses under the employment of the University of Medical Sciences Teaching Hospital, (UNIMEDTHC) Ondo, Ondo State, on Thursday protested the non-payment of their six months salary.

The nurses who converged on the Akure complex of the hospital, as early as 8 am, threatened to down tools if the state government fails to attend to their demands issuing a seven-day ultimatum.

Armed with placards of various inscriptions, the nurses said they would embark on an indefinite strike after the expiration of the seven-day ultimatum. 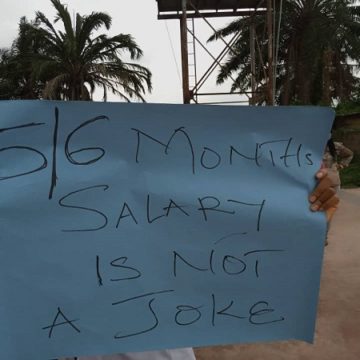 One of the aggrieved nurses, who identified herself as Margaret, explained that they were employed last year by the authorities of UNIMEDTH but said their salaries have not been regular.

She said most of them were being owed between four and five months while most of them have been turned to beggars.

She stated that “most of us were there during the outbreak of Lassa fever in June 2019 and the novel coronavirus disease (COVID-19) and we continue to risk our lives despite not being paid.

“They have been paying our salaries haphazardly, with a monthly salary paid after every 2-3 months. So many of us had to start borrowing to even get to work and meet up with other needs”

The nurses, however, demanded the regularisation of their slashed salaries and provision of Personal Protective Equipment, saying the failure of the state government to pay their salaries ranging between four and five months have turned them to beggars.

They explained that “starting from June 2019, some nurses were employed in batches, that is different months at the facility as the existing shortage of members of staff brought about the urgent employment of nurses.

“Following the employment, the newly employed nurses saw themselves working for between three and six months without being paid, depending on the batch of employment they belonged to. 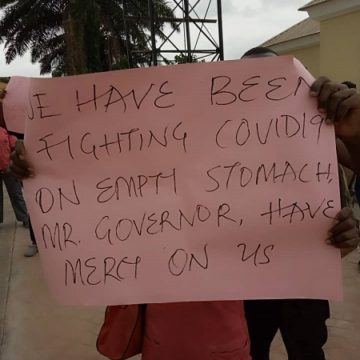 “Shortly after, the salaries started being paid haphazardly with a monthly salary paid after every two or three months, so many nurses had to start borrowing to even get to work and meet up with other needs.

“As it stands presently, about five months salaries are still being owed without any hope of being paid.

“All efforts to demand our salaries were sabotaged. Worthy of note is that a good number of us tested positive for COVID-19 despite not being paid.

“Asides these, the single and double qualified nurses in the same institution experienced massive salary slashes earlier this year”, they lamented.

The nurses demanded that their salaries should be moved to the central account as soon as possible, saying the management of the UNIMEDTHC has been hiding behind the late release subventions by the state government.

They, however, demanded the prompt payment of all outstanding salaries and arrears, regularisation of the slashed salaries, provision of PPEs and adequate equipment to work with.