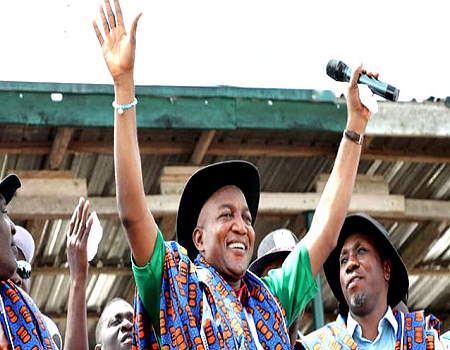 Deputy President of the Senate, Senator, Ovie Omo-Agege has congratulated the Bayelsa State Governor-Elect, Chief David Lyon on his victory in the November 16 governorship election.

Omo-Agege also commended the state and national leadership of the party, particularly the National Chairman, Adams Oshiomhole; Minister of State for Petroleum, Timipre Sylva; Jigawa State Governor and Chairman of the APC campaign council for the Bayelsa governorship election, Abubakar Badaru and other leaders who contributed immensely to the overwhelming success recorded at the polls.

In the final election results announced by the Independent National Electoral Commission (INEC) in the early hours of Monday, it declared David Lyon of the APC winner of the gubernatorial poll, having garnered 352,552 votes to defeat his closest rival and candidate of the Peoples Democratic Party, Senator Diri Duoye , who scored 143,172 votes.

This is contained in a statement issued on Monday and signed by Mr Yomi Odunuga, special adviser, media and publicity, to the Deputy President of the Senate.

Senator Omo-Agege stated that the victory has further confirmed that the APC’s overwhelming success at the last general election was not a fluke.

He also thanked the people of the state for the confidence reposed in the party and its candidate, assuring that they will not be disappointed.

While urging Lyon to always remember that the electorate expects an unreserved commitment to delivering the dividends of democracy to them, the lawmaker representing Delta Central Senatorial District called on aggrieved contestants to seek redress in court rather than resort to violence.

He expressed happiness for the APC in Bayelsa State for finally breaking the jinx by becoming the second state in the South-South after Edo to come under APC’s control.

“With this development and the actualisation of the Next Level Agenda of the APC-led administration, it is certain that our party will clinch more states in the South-South geo-political zone in future elections.

“As I have always said, it is possible for the APC to rule in the South-South beyond Edo State. And I have been proven right with the final results from Bayelsa State.

“This goes to show that with determination and tenacity of purpose, we can overcome what seems insurmountable,” Omo-Agege stated.