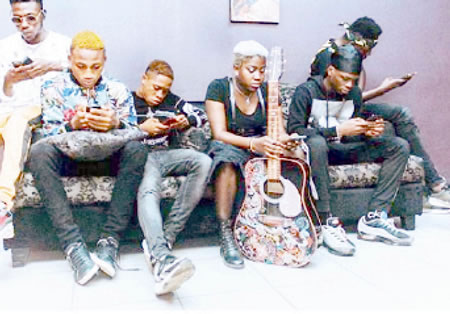 The music industry, on Wednesday, welcomed into its fold another set of rappers unveiled by Yahoo Boy No Laptop (YBNL) owner, Olamide, otherwise known as Baddosneh.

The rappers, Picazo, Yomi Blaze and Limerick, joined Lyta and Davolee, who both got signed to YBNL shortly after the exit of Adekunle Gold and Lil Kesh from the label.

Picazo, Yomi Blaze and Limerick were said to have been discovered on Instagram when Olamide saw the short videos of their indigenous Yoruba rap skills trending on social media platforms.

Olamide wasted no time in inviting the budding stars to his home and signed them on his label in order to promote and nuture their talents through his platform, which discovered Gold and Kesh some years back. With a new single from the new acts, entitled Juju Guns and Roses, already hitting the airwaves and sending many music lovers into frenzy, the budding artistes were full of praises to Olamide for his uncommon heart of kindness, one that would see them become stars in short while.

Speaking on his decision to take on the new acts, Olamide described them as the new set of rappers that would dominate the industry for a long time.

His words: “The industry is not even ready for what these boys are bringing. They are full of positive vibes and I am proud to be bringing them on for the love of music and expanding the YBNL empire.”

I want my music to be timeless —Adekunle Gold

I am happy to be Glo ambassador —Olamide