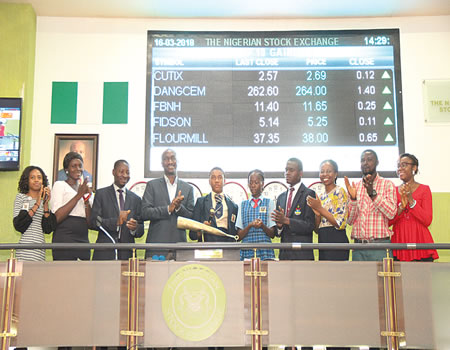 TRADING on the Nigerian Stock Exchange (NSE) closed on a positive note on Tuesday, with OkomuOil leading the gainers’ table for the day.

The News Agency of Nigeria (NAN) reports that the crucial market indicators appreciated marginally by 0.27 per cent.

Market observers attributed the growth to the price gains made by some blue chips, which they said may not be sustainable due to profit-taking by investors and the fast-approaching elections.

Specifically, the market capitalisation rose by N35 billion or 0.27 per cent to close at N12.573 trillion against N12.718 trillion on Monday.

OkomuOil gains N2.4 to close at N79.9 to lead the gainers’ chart, while GTBank and Zenith Bank followed with gains of 55k each to close at N37.05 and N21.9 per share respectively.

On the other hand, Nigerian Breweries topped the losers’ chart, shedding N2 to close at N93 per share.

United Bank for Africa was the most active stock, exchanging 54.44 million shares worth N436.03 million.