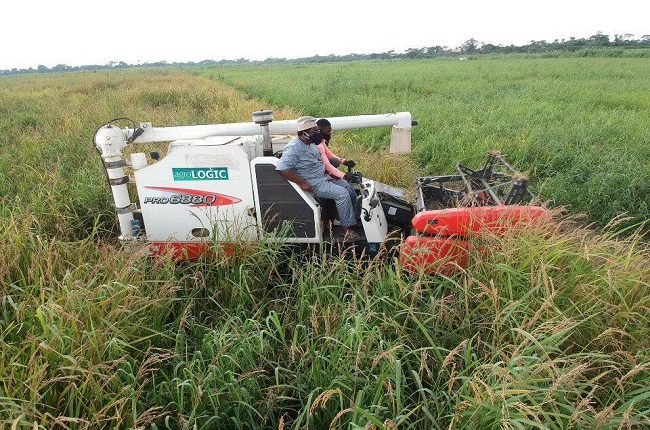 The Ogun State Government through the Ministry of Agriculture and the state FGN/IFAD Assisted Value Chain Development Programme, has commenced the harvesting of 125 hectares of Ofada rice.

This effort was aimed at boosting rice production in the country since the federal government had placed an embargo on rice imported into the country.

The State Commissioner for Agriculture, Dr Adeola Odedina, said this on Monday, at the flag-off of commencement of harvesting of wet season rice in the state at Sowunmi village, Mokoloki in Obafemi Owode Local Government Area of the state.

Odedina disclosed that the state under the present administration could boast of over 500 hectares of rice due for harvesting, submitting that government is planting rice in 10 different local government areas with existing four mills for processing.

He explained that the rice was planted in March shortly before the commencement of the COVID -19 lockdown.

“We are proud as a State, that the decision of the governor, Prince Dapo Abiodun, to grant permission and exemption for agricultural activities and support at the onset of the lockdown period, which coincided with the commencement of the rainy (wet) season, has yielded, and is still yielding practical results for all to see.

“For the avoidance of doubt, this harvesting is symbolic, as we are identifying with youth groups who have submitted themselves to the state-sponsored agricultural opportunities, as it abounds in all programmes facilitated by the governor, and approved in our agricultural road map.

The commissioner noted that state government provided the seedlings, herbicides and fertilizers to the Eredo Youth Rice Farmers with 180 cluster groups.

The State Coordinator of VCDP, Samuel Adeogun, submitted that the state government supported the young farmers with land for planting.

He added that the expanse of land was first opened up in 2016 for rice planting with only 80 hectares put into use while the remaining portion had been fully utilized.

“This rice was planted during the COVID 19 pandemic to showcase to the country that Ogun State is a rice-producing state, ” Adeogun added.

The youth president of VCDP in the state, Johnson Ajibola, commended the government the state government for the support while highlighting flooding and birds invasion as some of the challenges confronting it.