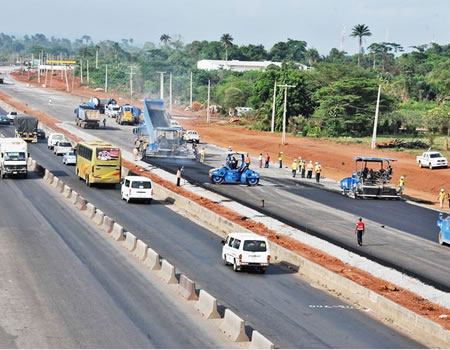 THE Federal Controller of Works in Lagos, Mr Adedamola Kuti, last week, appealed to motorists to drive with caution around construction zones to avert gridlock and accidents on Lagos-Ibadan Expressway.

Kuti, during a project monitoring tour of the highway, said that Section 1 of the Lagos-Ibadan Expressway was the busiest road in Nigeria and Africa because of the huge traffic volume.

He said that the traffic volume usually got lighter after the Sagamu Interchange but that impatience of road users usually caused unnecessary congestion around the construction zones.

“For example,  we came around to explain to Nigerians the situation of Lagos-Ibadan Expressway. A couple of days ago, up till last week Saturday, work was ongoing here and it resulted in a very serious gridlock which is really uncalled for.” he lamented. He explained that a truck broke down and before traffic regulatory agencies could clear the break down, other vehicles driving against traffic caused an accident that compounded gridlock on the highway.

The Controller added that Section 1 of the highway, which is from Ojota in Lagos to the Sagamu Interchange in Ogun, was 40 per cent completed due to additional works to the project, while the Mountain of Fire Church (MFM) section of the road had been completed and opened to traffic and appealed to motorists to be patient on all construction zones.

Mr Thomas Balzuweit, Regional Manager West, Julius Berger, said that the firm had an effective traffic management system that needed the cooperation of motorists to work.

He said that diversion signs and adequate warning signs were put on various locations that matter on site, adding that the strategy was constantly being reviewed for efficiency.

“We believe in very robust and very professional traffic management system that we put in place to safely channel the traffic flow at construction site. This is being done with our safety team,” he said.

He appealed for support and understanding of road users as, according to him, road construction anywhere in the world is a disturbance and not peculiar to Nigeria.

He said that half of the 272 deaths recorded on the highway in 2018 were around the construction zones due to indiscipline of motorists.

“And of all the the 80,000 vehicles that are in Ogun State, 40 per cent of them are trucks but they cause 60 per cent of the crashes. These trucks are old and are ill maintained and because they are not well maintained, there is tendency for them to break down.

“It is not only here they break down but why here is a little challenging is because we have higher number of vehicles, and so when they break down there is gridlock that spreads,” he said.

He added that it was usually difficult to get tow trucks to where trucks breakdown usually due to gridlock the breakdown may have caused.

He appealed to motorists not to exceed 50 kilometres per hour in line with traffic law to ensure safety of workers on site.