Obi elated at Okonjo-Iweala’s appointment, recalls her effort to save Nigeria 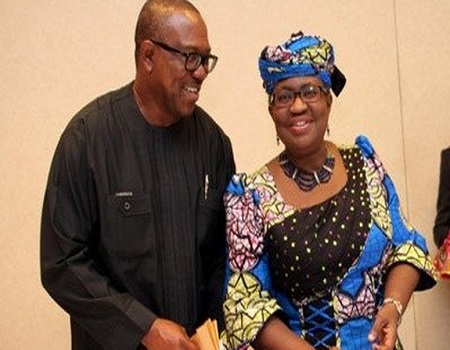 The Vice Presidential Candidate of the Peoples Democratic Party, PDP, in the 2019 general election, Peter Obi has described as deserving and highly rewarding the recent appointment of the former World Bank Managing Director, and former Minister of Finance of Nigeria, Dr. Ngozi Okonjo-Iweala as a member of South African Economic Advisory Council.

Obi said in a statement made available to newsmen in Abuja on Saturday by his Media Adviser, Mr. Valentine Obienyem, Obi pointed out that by the appointment South Africa had picked an experienced and committed economic manager.

Obi said that by the choice of Ngozi South Africa had put a square peg in a square hole in the restoration of her troubled economy.

Obi recalled nostalgically how Okonjo-Iweala’s effort to save Nigeria’s economy for the future came to naught when Nigeria Governors forum refused her fervent cry to save the huge sum in excess crude account in our Sovereign Wealth Fund for the rainy day and future of children.

According to him, “She was vehemently opposed and the Forum even went to court to force her to share the money.

“We called her names then, but look at the deteriorating situation we found ourselves today.”

In a congratulatory message despatched to Okonjo- Iweala on this landmark appointment, Obi described her as ” an exceptional personality and first-class ambassador of our country Nigeria and one whose commitment to a better society remains outstanding.

South Africa President Cyril Ramaphosa whose country’s economy is facing recession appointed former Nigeria’s Coordinating Minister of Economy to be a member of a powerful advisory team to turn around the nation’s dwindling economy.