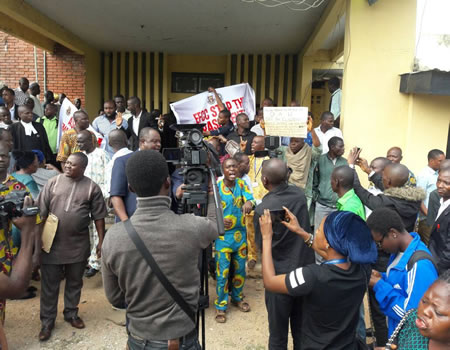 There was commotion within the premises of a Federal High Court, sitting in Ede, on Tuesday, when academic and non academic staff of Obafemi Awolowo University (OAU), Ile-Ife stormed the court in large number to prevent the movement of their former Acting Vice Chancellor, Professor Anthony Elujoba to Ilesa prison as ordered by Justice David Oladimeji.

Elujoba and the bursar of the university were standing trial for allegedly paying a sum of N1, 060, 725, 000.00 to the workers of OAU as hazard and productivity bonus between August and September, 2016 when he was still serving as the acting Vice Chancellor of the institution without approval of appropriate authority.

On Monday, when he we was brought to the court, Justice Oladimeji ordered that Elujoba, who was charged alongside the bursar of the university, Mrs Aderonke Akeredolu were ordered to be returned to the custody of the Economic and Financial Crimes Commission (EFCC) in Ibadan zonal office.

But, troubled ensued on Tuesday, when the judge ordered that they should be taken to Ilesa prison pending the ruling on their application for bail, which is expected to be delivered in the court on Wednesday.

The wife of the former acting VC shouted at the top of her voice in court, saying “my husband did not steal a kobo”, and when she could not control her emotions, she started weeping profusely.

Workers of the institution, who had been on solidarity with Elujoba since the commencement of his trial, besieged the court and their number continue to increase, resisting the attempt by security agents to move the former acting VC to Ilesa prison as ordered by the court.

As of the time of filing this report, they were still holding both lawyers and court officials, including Elujoba hostage, insisting that they would never allow him, being taken into Ilesa prison custody because he is not a criminal.

They also barricaded all the entry and exit routes into the High Court, sitting in Ede where the bail application was heard. Both the justices within the complex, lawyers and other court workers were held hostage by the protesters.

However, during the proceeding, the defence counsel, Ibrahim Lawal, argued that retaining Professor Elujoba in detention would amount to an infringement on his freedom of movement.

Justice David Oladimeji stated that it would be difficult for him to deliver the judgement this week, stressing that vacation commences by end of the week, but the the defence cousel pleaded that a date should be fixed.

Justice Oladimeji said, “This case is hereby further adjourned by agreement of counsels till Wednesday, July 19, for ruling on bail application. The two defendants shall be remanded in the Ilesa Prison pending the delivery of the ruling.”

Also, the students and workers embarked in a violent protest, which resulted into the damage of a vehicle, just as they allegedly attacked a person, believed to be a spying for those that sponsored the petition against the former acting VC.

But, the management of the rowdy situation degenerated when security officials were mobilised to the venue of the protest and upon sighting the security men, the protesting OAU workers armed with placards were wielding sticks and other mild weapons, including charms.

My victory, a lesson for APC ―Sen Adeleke

99 per cent children in FCT IDP camps are orphans ―FEMA