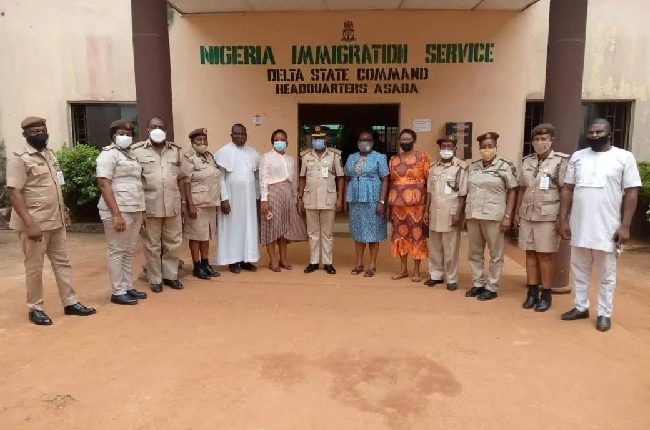 The Nigeria Security and Civil Defence Corps (NSCDC) and the Immigration Service have pledged their readiness to partner with the Delta State Child Rights Implementation Committee for the enforcement of the provisions of the Child Rights Law of 2009.

This understanding was reached when members of the committee paid advocacy visits to the two federal agencies, on Tuesday, to seek their collaboration to enforce the Child Rights Law.

Speaking during the meetings, the Chairman of the Committee and Permanent Secretary of the Ministry of Women Affairs, Mrs Oghenekevwe Agas, gave a legal background to the establishment of the Committee, adding that the mandate was simply to ensure that the rights of the Delta child were protected.

She averred that a lot of children move from place to place either aided or unaided, appealing that the Civil Defence should arrest such children roaming the streets during school hours and hand over to the committee, while the Immigration Service should assist in identifying irregular migrants or trafficked persons in our midst and help to repatriate them to their countries.

On her part, the Executive Assistant to the Governor on Special Duties, Barr Bridget Anyafulu, informed the two security agencies that children were not needed on the streets during school hours.

She insisted that the state was ready to apply the provisions of the Child Rights Law and the new Violent Against Persons (VAP), Law on anybody that breaks the law, adding that advocacy had been on since 2016 and it was time for the implementation of the law to take its course.

Anyafulu appreciated the NSCDC and Immigration Service for their previous cooperations while seeking their renewed partnership for the implementation of the law.

She said Delta was taking the four components of the Child Rights Law seriously and did not wish to continue to pamper those who derived joy in breaking the law.

Reacting to the committee’s request, the commandant of the NSCDC Delta State Command, Mr Chike Ikpeamaonwu, said his officers are ready to enforce the law.

He recounted how they had rescued several children in the past and handed over to Ministry of Women Affairs, thereby believing that they now know the appropriate people to work with for more coordinated results.

He, however, asked that the Ministry of Women Affairs provide them with the data of orphanage homes in the state to be able to track those operating illegally.

On his part, the Comptroller of Immigration Service, Delta State Command, Mr Ijegwa Onobu said the Committee had come to the right place, affirming that part of their function is dealing with migration management.

He acknowledged that no government or agency could enforce migration law all alone, thereby accepting the need for close synergy to achieve result.

He, therefore, noted that there wouldn’t be any issues with internal migrations, stressing that the Service would need to prepare adequately to deal with foreign migrations because of the peculiarity in logistics, funding and procedure in seeking approval from the headquarters to repatriate such foreign migrants seamlessly.