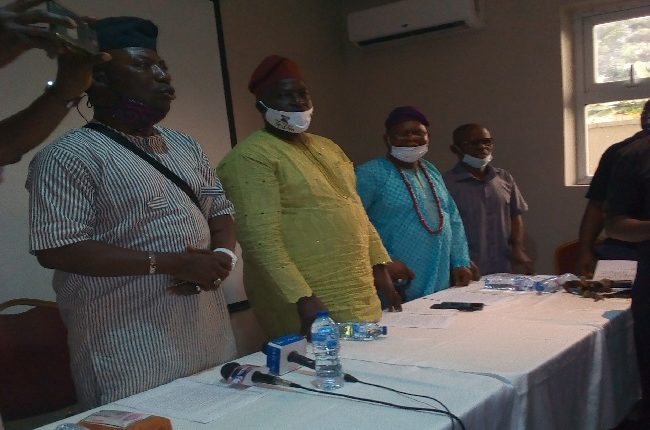 Coalition of Yoruba self- determination groups drawn from across the land, including O’dua Peoples Congress (OPC- New Era), Agbekoya, Kogi- Kwara Nationalist Movement (KKNM), Yoruba Network Alliance, among others, on Thursday in Lagos said it is resolved to pursue its self-determination agenda, declaring such as its minimum demand for which there are no negotiations.

Coordinator of the groups, Abdul Rasaq Olookooba, made this vow while addressing newsmen at Ikeja area of the state, saying the decision came about as Yoruba people since 1960 had continued to endure different forms of hardship and repression in the country.

According to him, the hardship and repression began from “the political upheavals of 1962, through the civil war when many Yoruba soldiers were forced to fight a war that had no meaning to them, to the doted landscapes of military coups and the imposition of repressive regimes over Yoruba territories, to the annulment of the June 12 election won by a Yoruba man, Chief M.K.O. Abiola, the horrendous murders, maiming, rape of our women and the cultural genocide imposed by the various military regimes and their Yoruba collaborators.”

The coalition coordinator described the demand for the O’dua Republic out of present Nigeria was a popular struggle and representing the aspirations of the Yoruba people all over the globe as it was holding simultaneously in six continents, saying it was a product of the spineless leadership that had characterized Nigeria since independence and accentuated by the vicious attacks on the race’s values and civilizations.

“We want to say clearly that these agitations are being fuelled lately by certain unfortunate developments. The primary causes are political and economic exclusion; lack of electoral credibility with Yoruba people not able to choose their preferred leaders, corruption, nepotism, primitive acquisition of public wealth by public officials and disdain for human rights and the dignity of man.

“The secondary factors are the invasion of Yoruba land by armed alien forces, the audacity of alien people invading and kidnapping, raping and maiming and killing of our Yoruba people, the mass migration of economic, cultural and extremist refugees to Yorubaland, the destruction of forest resources by armed Fulani invaders.

“Above all, clear signals indicate the prospect of the declaration of war on Yoruba territories, akin to the war of Jihad that was once declared on Yorubaland by Fulani invaders,” Olookooba stated.

The coordinator warned that any attempt to attack, kill or maim advocates of the agitation would only strengthen and embolden them in line with the global best practices.

“We call on the police and other security operatives to respect the rights of Yoruba people to self-determination and that this right is an inalienable right. We warn that any attempt to attack, kill or maim advocates of self-determination, will only strengthen and embolden in line with the global best practices,” he said.

The Youths Hold The Key To A United, Peaceful, And Prosperous Nigeria – Osinbajo

Our coalition with APC will prevail ― Alao-Akala’s son