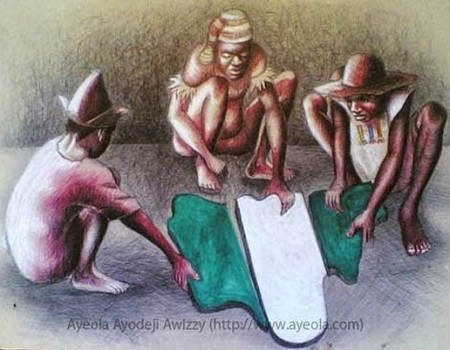 Of the true tangible signs of a developing economy, perhaps the most significant is bridging the gap in standards of living, thus improving individual capacity to stimulate economic activity buoyed by the level of investment. It is therefore, imperative to note that every economy, developed or developing possesses a certain level of economic and infrastructural disparity among its different territories due to several reasons.  These disparities, which can be attributed to either a natural course of development, which includes concentrated and strategic investment, availability of consumer population and/or entrepreneurs alike, availability of natural resources,or even sheer natural placement dictate the level of economic activity and subsequently further investment.

Levels of concentration vary  tremendously among different countries and this provides for a noteworthy contribution to equitable distribution of resource revenues. It is often perceived as somewhat tacitly logical to prioritize revenue-generating territories in order to satisfy its inhabitants. In practice, however, many countries have mixed systems where resource revenue distribution is both indicator-based and derivation-based. Take Nigeria’s derivation principle for instance, where 13% of net revenue from natural resources is to be invested back into respective repository sates based on the level of production. Of the remaining 87%, about 47% is shared based on indicator-based formulas which include population, social development, and revenue generation effort indicators.

In Brazil and Colombia, non-producing regions receive a share of oil and gas revenues based on transportation routes; these are allocated to territories that reside within a few kilometers of mining area. Uganda, Mongolia, Mexico, Ecuador, and Bolivia each use indicator-based formulas to allocate some natural resource revenues to different territories. Under these systems, natural resource revenues are allocated based on measurable indicators such as population, poverty rates and regional output (e.g. gross regional product), irrespective of where the resources are extracted from.

This in turn requires rigorous management to mitigate any perceived marginalization or injustice and to maintain a certain level of equity. This can be analogized to the form of parenting where favoritism for reasons such as precocity or even gender could have adverse effects on siblings and the family as a whole, albeit in a nuanced fashion. The effects of this concentration or the lack thereof lay an almost immutable foundation as to the future economic capabilities of these territories. It also distinguishes between a government’s competence and its inadequacy. And in addition to affecting economic activity and availability of infrastructure, these effects further shape the consequences of their paucity. Culminating in a dual economy. In apartheid, South Africa, the emergence of two racially segregated territories;a modern and prosperous territory with white employers and a traditional and backward territory with black unskilled workers resulted in a dual economy. The workers were uneducated and were purposefully denied access to improve either their skill or education. This created a system where the whites could invest and improve their education, infrastructure and overall standard of living. Whereas the blacks had no such capabilities.

They lived in deeply contrasting neighborhoods with deeply contrasting standards of living; a consequence of a deliberate and intricate orchestration of an extractive environment where the lack of development in the black neighborhoods buttressed the prosperity of the white neighborhoods. Basically a tapeworm gobbling on a sick body. Juxtapose Lagos, Nigeria’s boomtown,or Abuja, its center of unity’s economies with that of every other state and you’ll find deeply contrasting levels of development, patterns and magnitude of demand, technology, and lifestyle in general. Although not as profound as that of apartheid South Africa, which was a product of conscious manipulation as opposed to Nigeria’s inevitable outcome of the process of development. It is nevertheless a conspicuous divide worthy of a dual economy. In 2019, the Federal Accounts Allocation Committee’s (FAAC) contribution according to the National Bureau of Statistics (NBS) accounted for just over 49% of Abuja’s total revenue and 22.8% of Lagos’. With the exception of Ogun, where FAAC contributed to 35.31%, all other states had a higher FAAC to IGR contribution ratio. In fact, the average FAAC contribution to all other states stood at 77.8%. It is also worth noting that a significant amount of IGR stems from income taxes, where the government is the primary employer. Income tax thus being predominantly a product of FAAC allocations. A form of a financial merry-go-round.

The social statistics report in 2017 detailed the number of car plate numbers produced per state, agency, and type from 2013-2016. In the said report, from 2014-2016, FCT is said to have registered a total of 267,654 cars, whereas Lagos registered 369,071 out of a total of 1,868,726 cars registered in the country. These two states accounted for 34% of the total amount of cars registered during this period, just over one-third. Furthermore, the two states accounted for 36% of the total driver’s licence processed from 2014-2016. This highlights the existence of a wealthier populace as compared to the rest of the country. And further indicating a higher level of mobility and economic activity.  In simple economic concepts, credit leads to an increase in spending, thus increasing income. This leads to faster productivity growth and ultimately higher GDP. Several studies have shown that the efficient accumulation of credit has a positive and significant effect on output and employment opportunities. This applies to both public and private sectors of the economy provided there’s efficient management. In the April 2016 NBS report, ‘Bank Credit and Deposit by states in Nigeria 2010-2015’, a total of 60,928,291,070 naira was recorded as the cumulative total of all states’ bank credit within the years 2010-2015. Lagos alone accounted for 79% of the total with 48,241,270,390 Naira recorded. And FCT accounted for 3.8% with 2,322,159,300. Rivers did account for 4.3% recording a total of 2,624,775,390 Naira. All the other thirty-four states settled for the residual 12.9% recording an average of 0.37% per state. The ‘banks’ deposit on state basis’ recorded a cumulative total of 85,381,606,410 naira from 2010 to 2015, of which Lagos accounted for 51.8% of the total with 44,299,410,060 Naira while FCT accounted for 16.9% with 14,452,615,630 Naira. The two states therefore accounting for over 68% of total bank deposits further highlighting their financial strength originating from both generation and allocation.

Lagos’ economic supremacy could be attributed to its location as it is home to the most active port in the country, merely circumstantial. Abuja on the other hand is the capital (has been since its relocation from Lagos in 1976), where the national cake is shared and home to heads of all three arms of government. It is therefore incumbent that all developments if any, are apparent in the state capital. For a state characterized by its hustle and bustle, Lagos somewhat rewards its inhabitants with rather mixed fortunes. The disparity in income and general standards of living is rather considerable, meaning that the state in itself displays a rather compelling image of a dual economy.   Its different territories exhibit a remarkably disproportionate form of development, pinpointing several infrastructural, organizational, and even civilizational differences divided by only a few kilometers. And with a highly dense population, severe gridlock, and clogged roads, it is practically impossible to avoid the frustrations of mobility.

The cost and quality of livelihood in highly organized territories like Banana Island and to a lesser extent, Victoria Island, differ vastly from their counterparts. Not to speak of the despicable and uninhabitable slums existing all under the same roof. As we struggle to work out the complexities of standards of living and forms of development in this highly populated country, we can distinctly identify a divide worthy of attention. And regardless of how it can be interpreted, it is uneven enough to be categorized into different manifestations, different livelihoods, and indeed different economies. Not all is lost, however, for when the will is invoked, the recuperative powers of the state are simply extraordinary.

Hesitancy to vaccination: A hurdle to stemming COVID-19 pandemic