•Says it is silly for FG to gag the press 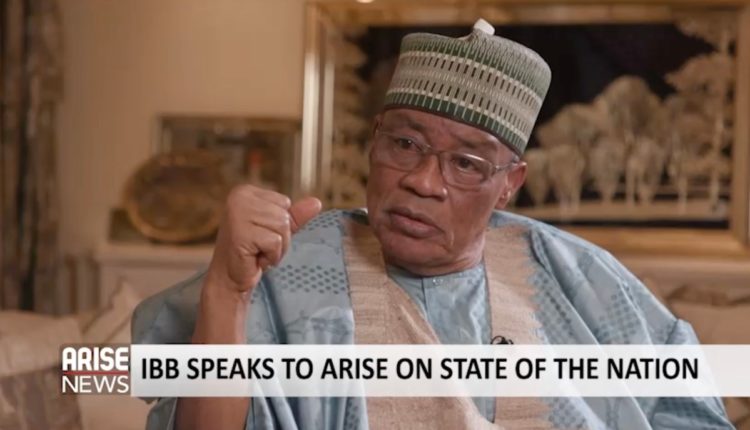 FORMER military president, General Ibrahim Badamasi Babangida, on Friday, said he was sure Nigerians would not allow the country to become a one-party state. General Babangida, who said this in an interview with Arise TV ahead of his 80th birthday coming up on 17 August, 2021, added that he was confident too that Nigerians would resist the current attempt to gag the press.

IBB, who was asked to comment on the state of the political process in the country and the fears that the gale of defections from opposition parties to the ruling All Progressives Congress (APC) would lead to Nigeria becoming a one-party state, declared that “it won’t happen; Nigerians won’t allow it.”

When he was asked to comment on the ongoing attempt by the current government to enact laws against media freedom, Babangida said the media and the people would resist it. “The media and the people will not allow that to happen. They will talk, they will make noise,” he said, adding that “it is silly to attempt to muzzle the press.”

Babangida also suggested that anyone above 60 years should not be Nigeria’s president in 2023. He said those who should come out in 2023 should be persons in their 6Os with contacts across the nation.

“If you get a good leadership that links with the people and tries to talk with the people; not talking on top of the people, then we would be okay. I have started visualising a good Nigerian leader. That is, a person who travels across the country and has a friend virtually everywhere he travels to and he knows at least one person that he can communicate with.

“That is a person who is very versed in economics and is also a good politician, who should be able to talk to Nigerians and so on. I have seen one or two or three of such persons already in their 60s,” he said.

But when asked if the person could emerge victorious in the 2023 presidential election, the former military leader said, “I believe so, if we can get him.”

On corruption, Babangida said the corruption in this fourth republic democracy is worse than when he was in government.

Babangida, who served as president between August 1985 and August 1993, said his administration was a saint compared to what is happening now. He said he moved against a former military governor who embezzled N313,000, while those who stole billions are walking freely today in Nigeria.

“But what is happening now is worse than when we were in power… We are saints when compared with that,” he said.

Babangida, however, said he has a “very good” relationship with President Muhammadu Buhari but stated that “the seeming rift between us is caused by you, the media.”

However, the pan-Yoruba socio-political group, Afenifere, observed that Babangida said nothing new on Friday, describing his interview as a sour taste in the mouth.

The Secretary-General of the group, Chief Sola Ebiseni, in a reaction to the interview, criticised Babangida for saying that he annulled the June 12, 1993 presidential election to prevent a coup in the country. Ebiseni said Babangida was hiding behind one finger with his claim that some top military officers would have staged a violent coup if had not annulled the election which was adjudged as the freest and fairest in the history of the country.

“He lost the opportunity of being the hero of democracy and father of a new Nigeria, an eternal regret that no whitewashing on television can redeem,” he said.

The group said: “However, it is no gain saying the fact that the present administration has made saints of all previous administrations in every aspect of governance.

“The Buhari government has failed even in the areas of his promises to Nigerians on security, economy and anti-corruption.

“Nigeria has been rendered a failed state in its obvious inability to secure life and property.

“The Babangida administration cannot be accused of sectional and sectarian disposition which is the hallmark of the Buhari government.

“Rather than indulging in comparing any government with the present, those who still have faith in the unity of Nigeria are only fervently praying and counting days for this evil cup to pass over.”

Covid and my poor erection