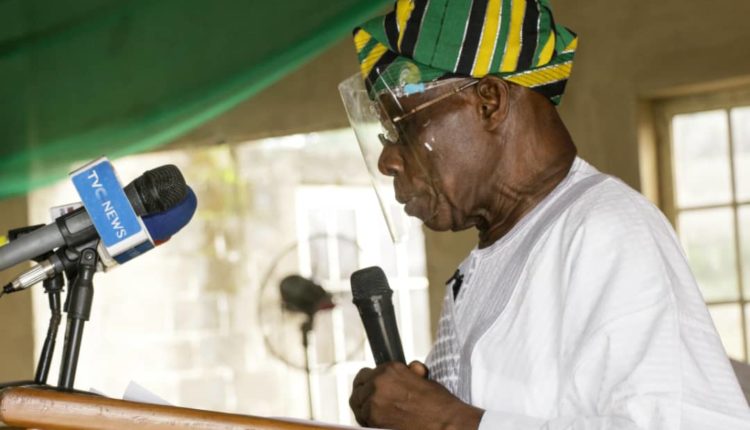 Former President, Chief Olusegun Obasanjo, on Friday, said Nigerians are bothered and burdened about the present security architecture in the country under the Muhammadu Buhari-led administration.

He said this at the 2020 Sobo Sowemimo annual lecture organised by the Abeokuta Club, adding that the handling of security situations by the present government does not give any individual or group any assurance of a secured nation.

Obasanjo, speaking on the lecture entitled: “COVID-19 and Nigeria Security Issues: The Way Forward”, however, said that the issue of fighting insecurity in any part of the country must be collective responsibility of all.

“There was a time armed robbers prowled the West and the Midwest in Nigeria and the arrested ones were tied to stakes and publicly executed. At a time, the North was comparatively unaffected.

“There was also a time when kidnappers, militants, and human traffickers ravaged the East and the South-South, again the North was relatively unaffected.

“There was a time when terrorists, bandits, girls kidnappers, herders/farmers conflict and cattle rustlers invaded the North-East and North-Central. The core North was relatively safe.

“Now, no part of the country can claim to be safe from the menace and insecurity caused by terrorists, armed robbers, human traffickers, kidnappers of all sorts, cattle rustlers, insurgents, bandits and herders/farmers conflicts.

“We are all challenged to put our thinking cap on, join hands and seek solution together, otherwise, we will be destroyed piecemeal. There is no time to stand and stare or just to continue to call on governments that are ineffective.

“Let us take initiative and spearhead actions that will involve governments and the governed and will devolve security architecture, apparatus, arrangement and responsibility in subsidiarity.”

On COVID-19, Obasanjo, said the African continent may or may not escape being epicentre, hence the need not to let down the guard, submitting that the flu might never disappear from the surface of the earth.

He, therefore, highlighted six areas that must be put in place as immediate post-COVID measures such as food availability and security; employment and job security; pattern and style of living including travelling; innovation, science, technology, digitalisation and artificial intelligence; local content, raw materials and substitutes and diversification of the economy and enhancement of export commodities.

He called for the repositioning of the country for the purpose of unity, equity, competence, good governance, security, stability, healthy competition, justice, fast socioeconomic development.

“I remain firmly convinced that without reform of federating units, as I will like to satisfy those who may not like the word ‘restructuring.’ Nigeria will remain insecure, unstable, non-progressive and stagnated at best or disintegrated at the worst.

“I have not lived for the demise of Nigeria nor for its destruction or incapacitation in any form. Rather, I have lived to make and see a great and united country,” he added.

In his welcome address, President of the Club, Mr Tokunbo Odebunmi, said the annual lecture was in honour of the founding president of the club to discuss any topical issue that would benefit the country.