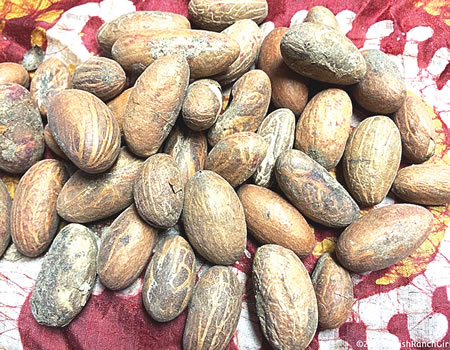 Nigerian researchers have patented four new substances present in bitter kola that have the potential to treat viral diseases such as HIV, COVID-19, heart and inflammatory diseases. One of the products can also serve as adjuvant in vaccine preparation.

The products became patented in December 2020, following over five years of research by a team of researchers at the Universities of Ibadan, South Africa and others.

Professor Ebenezer Olatunde Farombi, the team leader of the research group that patented the 4 products, said kolaviron, a substance present in bitter kola had earlier been established as an antioxidant and anti-inflammatory agent, and so relevant in the management and prevention of cancers, viral infections and conditions of the heart arising from plaques in the heart and other blood vessels.

Farombi, a former Head, Department of Biochemistry at the University of Ibadan, declared that the patented substances from bitter kola are very relevant for various human diseases, including viral diseases such as coronavirus and HIV.

The don said the group intends to package these newly discovered constituents of bitter kola substances into forms that people can easily get to buy in pharmaceutical stores and made available for patients care in hospitals.

According to him, his expectation is that the research efforts will receive support from the federal government, TETFUND, pharmaceutical firms or private investors for further Research and Development (R and D) and for mass production.

Farombi, Fellow, of Nigerian Academy of Science, said “one of these compounds has been demonstrated to have an impact in inhibiting one of the steps that is involved in the replication of HIV-1 and such a compound now makes the bitter kola to be a very potent antiviral agent.

“The second one is a product that can serve as adjuvant for vaccine production. That is it is a good excipient for pharmaceutical applications for the delivery of vaccines, drugs, genes, and other biological substances. Third, another has a robust anti-inflammatory property and because of that, it qualifies for cancer treatment. Inflammation is a key to cancer progression.

“Fourth, the last compound is relevant in the treatment of atrial rhythms such as atrial fibrillation (irregular and often rapid heart rate) , atrial flutter (heart›s upper chambers (atria) beat too quickly), and atrial tachycardia (Improper beating of the heart) and so very relevant in the maintenance of a healthy heart and blood vessel.”

He added that his research group with one of his former PhD students, Dr. Ifeloluwa Awogbindin had also demonstrated that another product from the Bitter kola was effective in curtailing influenza virus (Flu)

Professor Farombi, however, said “we are not saying that it is a drug for the cure of any of these disease conditions, but that they are products from the bitter kola that if individuals take regularly, have implication in mitigating the processes leading to the development of these diseases.

“But much more importantly, what we really need to do now is to actually get investors to engage I further development of these products to actually target these specific diseases and for the benefit of the teeming population.

Nevertheless, the don, said various studies have confirmed that bitter kola is an immune booster and recommends that Nigerians take two to three seeds of bitter kola daily after their meal even as the second wave of coronavirus ravages the world.

Even after COVID-19 vaccination, use of facemask, hand sanitiser is still important