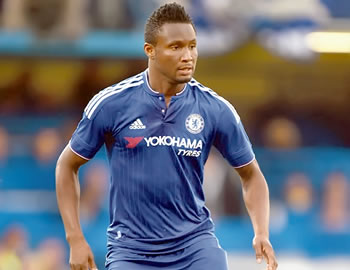 This is the concluding part of the piece by GANIYU SALMAN, the first part of which was published last weekend highlighting the exploits of some of the Nigerian players last season in foreign leagues.

Mikel Obi
Mikel had a splendid romance with Chelsea last season despite his modest accomplishment.

He became a rebranded player with the coming of Guus Hiddink after the sack of flamboyant manager, Jose Mourinho, as he had more playing time under the Dutch manager. His regular appearance forced Brazilian Ramires to join a Chinese side, Jiangsu Suning.

Mikel played a vital role when the Blues took on Paris Saint German in the knockout stage of the Champions League as he scored in the 1-2 loss at the Parc des Princes in Paris.

The Nigeria captain had his 59th Champions League appearance at Stamford Bridge when the Blues eventually bowed out in the Round of 16 following another 1-2 loss to PSG.

The midfielder believes he will equally command a regular shirt under incoming manager, Antonio Conte, hence his decision to shun a number of offers being dangled before him.

Prior to Conte’s arrival, Mikel had said “I have one more season with Chelsea but I know when this season ends, we will definitely sit down and try to sort out whatever needs to be sorted out. If it means me leaving, fine.

“If it means me staying, then I have to play because one thing I don’t want to do is to sit on the bench like I did before.”

Mikel is on the 35-man provisional list for the Rio Olympics as coach Samson Siasia might consider him as one of the overage players for the Games billed to hold in August this year.

Kelechi Iheanacho
The starlet was a delight to watch in his debut season with Manchester City.

He played most of his games from the bench, but made a tremendous impact. His consistency made him the toast of his former manager, Manuel Pellegrini.

After first playing for the City U-21 team, Iheanacho was elevated into the main squad and he did not disappoint Pellegrini, having finished the season with 14 goals in 26 appearances.

The Taye Academy product who was ranked among the top ten emerging talents in the EPL last season, would always be remembered for his spectacular hat-trick against Aston Villa in the FA Cup till the new season begins.

His exploits at the just-ended season earned him plaudits from the Citizens chairman, Khaldoon Al Mubarak, who remarked that “We’ve had some good experiences this year with pushing some of our talents from the academy and Kelechi is a great example of that”.

Iheanacho, who had his senior international debut last November against Swaziland, in a World Cup qualifier, also scored in the 3-1 defeat of Luxembourg in May this year after featuring in a double header against the Pharaohs of Egypt.

Al Mubarak too believes the Nigerian international can perform better in the new season if given more playing time adding “I think next year and the years that are coming he will have more minutes and I hope he will keep that goal-per-minute ratio at the level it’s at right now”.

The 2013 FIFA U-17 World Cup Most Valuable Player, also clinched the award of being the player who scored a goal-per-minute ratio, a feat which eluded more deadly finishers such as Lionel Messi, Cristiano Ronaldo  Luis Suarez and Karim Benzema, among others.

With only 11 starts last season, Ihenacho given his performance must have endeared himself into the heart of the new City manager, Pep Guardiola in the new season which begins in August.

He is among the 35 players listed by Nigeria for the Rio 2016 billed for August.

Isaac Success
The Nigerian striker was indeed a success last season with Granada CF of Spain. He netted six goals in 30 appearances and was instrumental in the survival of his club in La Liga last season.

His exploits with the Estadio Nuevo Los Carmenes based-side earned him offers from a number of clubs before he a few hours ago put pen on paper for the English Premier League side, Watford to join his kinsman, Odion Ighalo at Vicarage Road.

Success, a product of BJ Foundation, Benin City, had started with Granada B team before his elevation to the senior team and eventually hit a jackpot with Watford, which had a modest finish last season in its EPL debut.

The former junior international who became Watford’s record signing with £12.5m (N4.8billion) is expected to form a superb combination with Ighalo in the incoming season.

Anthony Ujah
Ujah finished with 14 goals in all competitions last season for Werder Bremen which escaped relegation from the Bundesliga.

The Nigerian international who had his debut season after signing a four-year contract with Werder Bremen endured the longest goal drought of his career, scoring 14 times in 37 appearances.

Ujah, however, surpassed his Bundesliga goal tally of 10 goals for FC Koln in the 2014/15 season.

Moses Simon
Simon had a superb season with KAA Gent of Belgium. The Nigerian international helped the Belgian side to the knockout stage of the Champions League before it lost to a German side, Wolfsburg 4-2 on aggregate.

He finised with 10 goals in 44 games last season including five appearances in the Champions League.

Simon who is among the 35 players on the provisional list for the Rio Olympics, had his first international goal last September in the 2-0 win over Niger Republic in a friendly.

Haruna Garba
Haruna Garba unknown to many emerged the best Nigerian striker in Europe at the just-ended season having scored 22 goals for Hamrun Spartans of Malta. His exploits aided his side to gain promotion to the top division in the Maltese league.

Garba became the first Nigerian player in Europe to surpass the 20-goal mark last season and also emerged the second top scorer in the second division.

Rio Olympics: Dream Team lands in Manaus •Set for 2am match with Japan