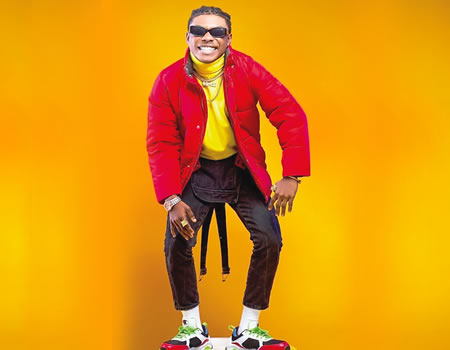 Haekins is one of the young energetic artistes currently making waves in the Nigerian music industry. He speaks to ROTIMI IGE on his musical ambition and how he intends to make himself relevant in the music business.

How I discovered music

Music has always been my passion and I remember getting involved since I was a little child. My parents were very protective of me because of the late nights that making music involves. Over time, they just got used to me making music because I’d shown a lot of passion for it, and I started officially at my church where I used to engage in talent hunts and got paid in very small amounts.  My church always supported young talents and so it helped me, coupled with my craft and these gave me an eye opener into the whole music game. Then, I was just making music a lot, even when I was supposed to be in school.

My biggest music influence has to be Micheal Jackson because my parents listened to him a lot and so I had no choice. Also, my love for Fela Anikulapo-Kuti’s music grew with time and his influence on Afrobeats influenced most artistes’ music and help shaped their careers one way or the other.

My kind of music

I make Afro-fused genre of music that I like to call ‘Afro-Haekins’. This is  because I tend to join several elements together; I draw inspiration from myself and some from Afrobeats. Together, it’s my own kind of music because there are so many other sides to my music that I’ve not released out yet but, I have so much music in me to give to the world and I can’t wait for fans to watch out for my body of work dropping sometime next year.

Challenges faced so far would be going to shows I got called for and then ending up not being able to perform. Also, some fans try to compare me with other young talented artistes coming up but it’s all been part of the journey. I believe I’d grow to become my own person and the fans would love that and accept me for me.

That would be when I dropped ‘Expressions’. I didn’t even see the song going that far because it was very different from what was being released at the time. I just wanted to be myself on my music regardless of what tempo or kind of music was out at that time, but it turned out big for me and I thank God. Now, I can’t wait to drop more hit songs.

It was a great experience and a stepping stone for me because I see myself now, getting better every day and so, I just put myself in a bigger situation whereby I’m working with the best. This makes me put out my best in every record I get to be on and I’m grateful all the way

You are yet to be nominated for notable awards despite having a number of hits. How does that make you feel?

It makes me feel good and bad at the same time because I know I work so hard. However, I believe everyone has his time and I want the world to really enjoy my music. I don’t want to be a flash in the pan, I want to leave an impact for eternity. That’s my motive, so I know I would be getting those award nominations at the right time.

Do you think having an album makes an artiste more relevant?

Well, having an album goes a long way and it does make one relevant. It also makes your fans love and accept you more. An album also puts you in a place where you are able to interact with your fans more on stage and get to perform in certain shows and events.

What is next for Haekins

I have a lot of amazing music in store and I would be releasing them very soon.  I want to give my all in my music. You would find my true self and my purpose on earth being portrayed musically. Also, my EP is ready but I think I’d be dropping one more single before that.

Rate the music industry at the moment

The music industry, at the moment, is looking great. Afrobeats has evolved and is accepted all around the world. The likes of Davido and Wizkid have paved way for Afrobeats and taken Nigerian music to the whole world and I believe there’s still more to come as we fast-rising acts will also be making global impact. So help us God, amen.

Where I see myself in a few years

I see Nigerian entertainers like myself in bigger places, disturbing the world with good music. As for me, I’m not just an entertainer for Nigeria and Nigerians alone. I know I’d be touring the world with my sound soon because it’s evident and I believe that with hard work, determination and patience, I would be where I’ve always dreamed to be; performing on the biggest stages in the world and making music definitely.

Honestly, I spend a lot of time in the studio and I play video games. I don’t like to go out that much or party; I’d rather be in the studio working or probably spending time with my family and friends. Though I love to do other things and explore life, basically, for now, I’m always working.

Cardi B to visit Africa for the first time in December