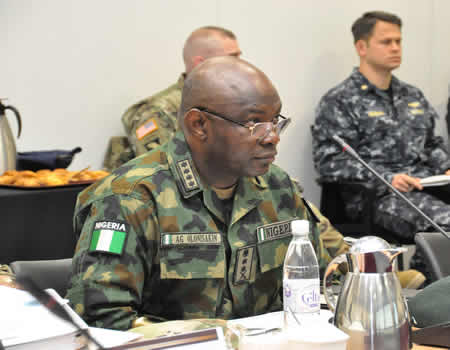 The Correspondent of the News Agency of Nigeria (NAN) reports that Olonisakin stated this at the meeting of the ‘Global Coalition Working to Defeat ISIS’ in Washington, D.C.

“After  over 2.6 billion dollars was spent by the Nigerian Government to address humanitarian needs in 2016 – more needs were seen when areas were recovered from Boko Haram.

“Many in this room joined us in Oslo, Norway just last February to show support with Nigeria.

“Coalition is fundamental. We, therefore, commend Secretary Rex Tillerson and President Donald Trump for remaining committed to fighting the global enemy of us all – terrorism,” Olonisakin said.

“This meeting, therefore, will further strengthen our collective resolve and determination to destroy and defeat ISIS.

“To this end, Nigeria is prepared to work with the coalition in the pursuit of the first lines of efforts towards the realisation of the aims of the global coalition,” he said.

He commended the steady progress made in Iraq, and Syria in denying ISIS access to territories and closing up their supply routes.

According to him, it is, therefore, imperative that as part of the objectives of the meeting, global leaders consider the value of timely sharing of information and best practices on addressing cross-border threats.

He also emphasised the need for mobilisation of resources for partners in the conflict and confronting violent extremist organizations with the digital battle space or cyberspace.

He added that reshaping the public narratives around ISIS to one of failure, was also critical in the battle to defeat ISIS.

“Let me also add that this meeting is of great importance to Nigeria.

“This is because, Nigeria’s effort to defeat the Boko Haram terrorists is viewed as part of wider efforts to combat violent extremism globally especially, the defeat of ISIS.

“Nigeria is open and willing to adopt strategies from the coalition that could further enhance its success story,” Olonisakin said.

U.S. Secretary of State Rex Tillerson, in his welcome remarks, said “it is indeed encouraging to see the attendance”.

“When the forces of ISIS tune into their TVs and their computer monitors, they will see the strength of a combined 68 nations and organisations.

“Together, we share a resolve to deal ISIS a lasting defeat. Our coalition is united in stopping ISIS resurgence, halting its global ambitions and discrediting its ideological narrative.

“And we’re ready to grow stronger and stay aggressive in this battle.

“President Trump, in his recent address to the joint session of Congress, made clear that it is the policy of the United States to demolish and destroy this barbaric terrorist organisation”.

NAN reports that the meeting was attended by Ministers of Foreign Affairs and senior leaders of the 68 countries of the global coalition working to defeat ISIS.

NAN also reports that among those who attended the meeting were Chargé d’affaires of the Nigeria Embassy in Washington, Hakeem Balogun and senior officials of the Ministry of Foreign Affairs.