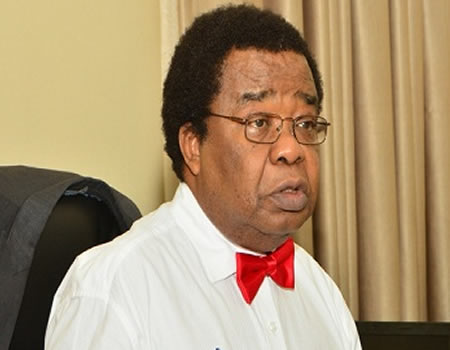 Should ECOWAS go ahead with its plans, Akinyemi, said the Federal Government should serve a notice to ECOWAS that it would terminate its membership of the organisation.

Akinyemi, who was deputy chairman at the 2014 National Conference, described the development as “the biggest challenge to Nigerian Foreign Policy since the civil war.”

“Let the West African Heads of State and Presidents drop this whole issue of expansion to the Mediterranean or Nigeria should serve notice that it would terminate, ‘not suspend,’ terminate membership of ECOWAS,” Akinyemi said in a release made available to Nigerian Tribune on Thursday.

Akinyemi, who described the development as “the biggest challenge to Nigerian Foreign Policy since the civil war,” said “the move is motivated by bad faith driven by the desire to whittle down Nigerian influence in ECOWAS, and by extension in the world, as Nigerian status as a regional power is facilitated by its role in ECOWAS.

The statement reads in full: “Since I left the office of the Minister of External (Foreign) Affairs in December 1987, I have refrained from making direct comments or I can count on the fingers of one hand, the number of times I have made comments on issues which are of direct concern to Nigerian foreign policy. I did this because I believed and still believe that having had my own opportunity at batting, the present Ministers at the crease should be allowed unfettered room during their innings.

“Firstly, the creation of ECOWAS was one of the most fundamental post-civil war strategic policies arising out of the lessons of the civil war which is that it is in the strategic interests of Nigeria to lock its West African neighbours into an area of co-prosperity and co-stability. Since then Nigeria’s security policies in Liberia, Sierra Leone, Cote Divoire and Gambia had been anchored on ECOWAS. When South Africa tried to be an interloper in Cote D’Ivoire, it was on the platform of ECOWAS that the South African attempt was seen off. That also explains why Nigeria bears a substantial cost of the ECOWAS.

“Secondly, the geographical boundaries of regions have acquired a legal status internationally. The United Nations, the African Union and all international institutions now use the concept of regionalism in the distribution of both appointive and elective posts. ECOWAS cannot unilaterally expand the boundary of West Africa to the Mediterranean. What is the legal or moral or historical justification? How does this dovetail with the acceptable international norms and usage?

“Thirdly, how well thought out is this move? If ECOWAS now shifts West African boundary to the Mediterranean, does it mean that not only Morocco and Tunisia, but Egypt, Libya, and Israel (shares a boundary with Egypt) and Palestine are eligible for membership in ECOWAS?

“Fourthly, in whose interests is this move? Definitely, not in the interests of members of ECOWAS. When elective and appointive posts and resources are being allocated by international institutions, does Morocco now benefit from the West African quota? This is not just a theoretical issue. Elections to seats at the Security Council, the World Court, various Commissions of the United Nations are distributed on regional basis. Morocco, as a member of the Arab League, will benefit from the Arab League quota, and then have another bite at the West African quota, without other West African states benefiting from the Arab quota.

“If the ECOWAS decides to invite Angola, Mozambique, South Africa or even Ethiopia to take up membership, my concern will be exactly the same.

“Having failed to find any rational benefit to ECOWAS by expanding membership to Morocco, I can only conclude that the move is motivated by bad faith driven by the desire to whittle down Nigerian influence in ECOWAS, and by extension in the world, as Nigerian status as a regional power is facilitated by its role in ECOWAS.

“Nigeria has only one option: Let the West African Heads of State and Presidents drop this whole issue of expansion to the Mediterranean or Nigeria should serve notice that it would terminate, NOT SUSPEND, TERMINATE its membership of ECOWAS.

“This issue is the biggest challenge to Nigerian Foreign Policy since the civil war.”