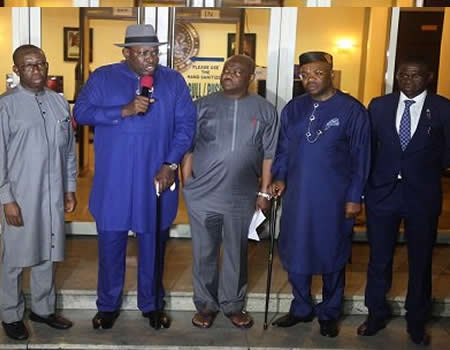 Governors of the states making up the Niger Delta Development Commission (NDDC) have kicked against the recomposition of the board as announced by the federal government on Wednesday.

They met in Abuja on Thursday night to assess the new board appointment approved by President Muhammadu Buhari and resolved to meet with the president to discuss their concerns.

In the new appointment approved by the President, former Edo State Governor, Dr Pius Odubu emerged as the Chairman-designate.

A statement issued by the office of the Secretary to Government of the Federation (SGF) on Wednesday had also named  Bernard Okumagba from Delta State, as Managing Director of the commission.

Ardo Zubairu from Adamawa State is to represent the North-East; while Badmus Mutalib from Lagos State will represent the South-West region on the board.

ALSO READ: Bauchi gets N800m from FG to control flooding

But addressing journalists after the meeting, Governor Dickson noted that there had been a protest in some places over the new appointments and appealed to the people of the Niger Delta to remain calm.

He said the governors were unanimous in their concern about the governance process in the NDDC and the way and manner the recent appointments were made.

“Accordingly, we have decided that as soon as it is convenient for Mr President, we intend to have an audience with him,” he said.

Dickson noted that even though the states were critical partners in the commission, they had not been carried along.

Bauchi gets N800m from FG to control flooding