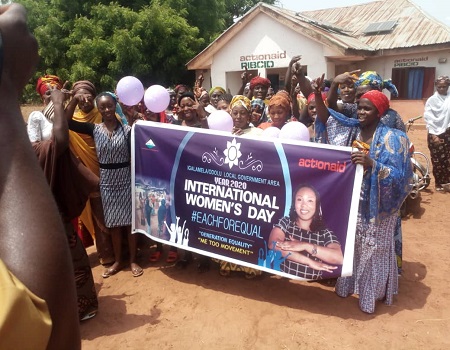 Participation Initiative for Behavioral Change in Development (PIBCID), a non-governmental organisation based in Kogi State has called on the state government to address issues of gender inequality, urging women in the state to be proactive in fighting for their right.

The programme officer of PIBCID Mr Jimoh Olaruwaju who made the call in Ofuloko community in Igalamela/Odolu local government area as part of activities to mark the 2020 International Women Day, said women can only get their rightful place in the society when they stood firm and fight for it.

The programme which involved women walking round the community was organised by PIBCID in collaboration with Actionaid Nigeria a human rights non-governmental organization working to combat poverty and all forms of injustice in Nigeria.

Olaruwaju identified culture as one of the major factors that has created a gap and caused disparity between men and women in the society, urging women not to relent in their oars to continue campaigning for their right by asking questions whenever they are cheated.

ALSO READ: AFDB to invest $200m on mini-grids roll out

“Imagine in Kogi State out of seventeen commissioners only one woman was considered, worst of the woman marginalization was the state house of assembly where there is no woman out of 25 members of the assembly.

“Local government election is around the corner and this is the right time for women to ask questions and demand for their share of positions. If you don’t ask questions the men will not consider you for any political appointment” he said.

Speaking at the occasion, APC woman leader, Igalamela/Odolu local government Mrs Kaka Atawudi lamented that women have been subverting their rights for not believing in themselves.

She advised women in the local government to come together and speak with one voice in order for them to fight for their right.

According to her “Prior to the governorship election in the state, cars were distributed to politicians in this local government but no woman benefited because the men do not see us as being important.

“Now that Actionaid Nigeria and PIBCID are supporting our cause we will redouble our effort to ask for what belongs to us, we can not continue looking at the men as if we are not relevant in the local government” he said.