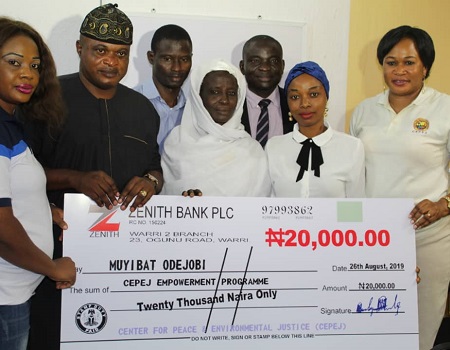 Share
To cushion effects of the current economic hardship in the country, a Niger-based Non-Governmental Organization, the Center for Peace and Environmental Justice (CEPEJ), has empowered a group of petty traders with cash to boost their businesses.
The cash disbursement, N20, 000 in cheque to each beneficiary, was done at the Lagos State office of CEPEJ, located at 2, ASA Afariogun Street, Ajao Estate at the weekend.
In attendance was a representative of government officials from the Oshodi/Isolo Local Government Area, Mr Ganiu Mejindade and the Chief Executive Officer of Out-of-School Children Empowerment Foundation, Mr Akeem Tolu Kelani.

Beneficiaries of the maiden edition of CEPEJ Empowerment programme included widows and single mothers engaged in petty trades such as roasted yam, plantains and potatoes as well as tomatoes, second-hand clothes among others.
The National Coordinator CEPEJ, Comrade Mulade Sheriff, who was represented by the Communications and Advocacy Manager, Mrs Victoria Ajayi, commended the government on the positive changes so far in Lagos.
He charged the state government to partner with the organization so that the number of beneficiaries reached would be more than has been achieved.
Some of the beneficiaries, which included Emily Nbezuo, a widow and a petty trader who sells roasted yam, plantain and potatoes by the roadside at Ajao Estate, Mrs Muyibat Odejobi, a petty trader, widowed with three children and a widower, Sani Lawa, with four children among others, thanked CEPEJ for putting them into remembrance, promising to make good use of the cash gifts.
An official of the Oshodi/Isolo Local Government Area, Mr Ganiu Mejindade, who represented the government, lauded CEPEJ for a job well done and promised to partner with the organisation in similar  future initiatives
Share FacebookTwitterGoogle+ReddItWhatsAppPinterestEmail