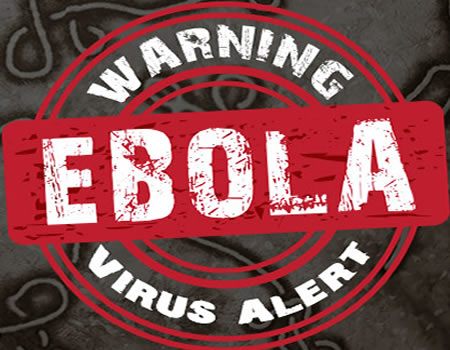 JUST when it seemed that people in Africa were safe again after the devastating Ebola outbreak, we have a new worry. An outbreak of a related virus known as Marburg Virus has begun in a city called Turkana along the Kenya-Uganda border in East Africa.

Marburg virus was first identified in 1967 when an outbreak of a hemorrhagic fever began at the same time in laboratories in Marburg and Frankfurt in Germany as well as in Belgrade, Serbia (then in Yugoslavia). The outbreak included 31 people and it began among laboratory workers, then medical personnel and finally family members who had been caring for those infected.

Marburg virus is in the same filovirus family as Ebola. Early symptoms are flu-like, with a sudden onset of fever, chills, muscle aches and decreased appetite. This can progress to abdominal pain, vomiting, dehydration, disorientation and joint pain.

The most dramatic symptoms are the dilation of blood vessels, which can turn eyes bright red, and bleeding from the gastrointestinal tract, under the skin, from any wounds and mucous membranes. There is no proven treatment other than supportive care. Mortality varies from 30 to 90 percent.

According to Reporternews, Marburg, like other filoviruses, can be spread by contact with blood, bodily fluids or tissues or contact with contaminated objects. The latest outbreak began in September when a game hunter in his 30s was admitted to the hospital with a high fever, vomiting and diarrhoea. The man lived near a cave that contained many African fruit bats, which are the reservoir host, or the host in which the virus normally resides but does not show signs of disease. Primates, including humans, can get infected from contact with bats, bat urine or droppings. The game hunter was initially treated for malaria but his condition continued to deteriorate and he was transferred to another hospital, where he died. His sister and brother later died, and two healthcare workers fell ill.

As with the Ebola outbreaks, public health officials try to track down everyone who had contact with someone who may have Marburg. That can be challenging because of large families, the traditional burial rituals and healthcare settings that are not at modern U.S. standards. Hospitals in the region still use wards with many patients in one large room, making it difficult to limit contact and control infections.

The mountainous region along the Kenya-Uganda border is also a challenge. The region includes the northern slopes of the Mount Elgon National Park which spans across the two countries.

In the park and nearby mountains, caves with large populations of fruit bats are major tourist sites. Being so near the border also opens the possibility of the virus spreading in two neighbouring countries.

Hopefully, some of the lessons learned from the recent Ebola outbreak will help limit this outbreak of Marburg. According to the World Health Organization, during the outbreak from 2014 to 2016 there were 28,616 suspected, probable and confirmed cases of Ebola, with a total of 11,310 deaths in Guinea, Liberia and Sierra Leone. We hope that this new hemorrhagic fever outbreak will be better controlled.

41 out of 54 African countries now have coronavirus as cases hit 1,100